R J Nakashian holds off '15 Champion Stephen Anderson down the stretch to capture 2016 Mid-Senior Championship by one stroke. The Mid-Senior Championship, with players 40 years of age or older, was hosted by Mission Inn Resort & Club on the El Campeon and Las Colinas courses. The players played 18 holes on each course before the cut was made at 17 over-par, 161 two round total. 62 players advanced to the final round on Sunday trying to chase down Jamie Girardi and R J Nakashian tied at the top. Both players posted steady even par second rounds following their opening 71’s to lead at one under-par. Sunday’s final round will be an exciting finish with defending Champion, Stephen Anderson, and 2015 Amateur Player of the Year, Joe Alfieri, four strokes back.

Round One & Two Recap

R J Nakashian, of Palm Beach Gardens, wins the Mid-Senior Championship for the second time by one stroke with a two under-par 214 total! At the start of the final round, Jaime Girardi seemed to have the upper hand. Girardi birdied the first two holes to take an early three shot lead over 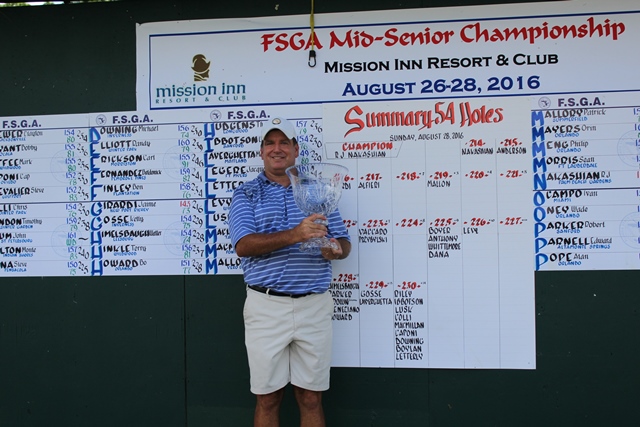 Nakashian. Nakashian, who won in 2014, played steady golf and would regain his lead after Girardi bogeyed holes three, four, and seven on the front nine. Stephen Anderson, defending Champion and Nakashian’s Mid-Amateur Four-Ball partner, made some noise from behind as he eagled the par five, tenth hole to tie Nakashian for the lead at the start of the back nine. R J fought back with a birdie on the 14th hole and Anderson faltered with a three-putt bogey on the 17th hole for a bogey. Girardi fell from contention with a double-bogey on the 13th hole. Nakashian finished his final round with a one under-par, 71 to capture first place! Stephen Anderson, of Hobe Sound, posted an impressive final round of 68 but could not catch Nakashian, finishing one stroke shy in second place. Girardi, of New Port Richey, rounded out the top three finishing with an even par total of 216. This marks Nakashian’s second Championship victory this year after he won the Mid-Amateur Four-Ball Championship partnered with Stephen Anderson!