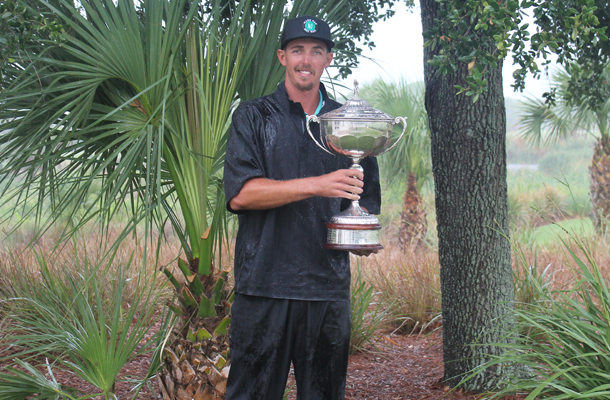 In a back and forth match, Jeff Golden jumped out to an early lead, and would extend it to 2 up at the turn. Dull would begin his come back with a chip-in birdie from off the green on #12. On hole 15, sitting 1 up, Golden looked at a 6 foot par putt to win and move to 2 up, however he would burn the edge and miss low. Dull would win the 16th hole with a birdie to get the match to all square. With the players on 17, play was halted by heavy rains. Regrettably, the match ended in a default.

The Sunday morning semifinals saw some fireworks. In match one, Jeff Golden got out to a 4 up lead through 8 holes. Hernandez would then win 4 of the next 5 holes to sit on the 14th tee all square. The players would halve holes 14-17 with pars. On the 18th, Hernandez found trouble off the tee, and laid up. Golden safely found the green in regulation, leaving about 60 feet for birdie. Hernandez would hit his third to about 10 feet below the hole for a strong par look. Golden made sure that par putt did not matter, draining a 60 footer to win the match 1 up.

In Semifinal two, Marc Dull found himself down throughout the whole match despite making minimal mistakes. Down 3 thru 11, he got one back when Shuart 3 putted the par 3, 12th. Dull then birdied 15 & 16 to get to all square. Shuart would make another bogey on 17, putting Dull 1 up. The pair would both make par on 18 giving Dull the 1 up victory.

After 19 holes Shuart prevailed to meet Marc Dull in the Semifinals. Dull advanced with a 6 & 5 victory over Miles McConnell as Hernandez and Golden continued their winning streak. Golden would face Hernandez to reach the Final match on Sunday.

Exciting results concluded Saturday morning’s round of 16 matches. T J Shuart is the only past Champion continuing his race to be crowned Champion once again after a 3 & 2 win against number 31 seed, Taylor Dustin. Marc Dull continues to advance, winning his match against his very own U.S. Four-Ball partner, Chip Brooke, 3 &2. Number four seed, Jeff Golden, of Jacksonville, is en route to his first FSGA victory since 2007. Golden, who was named 2007 Player of the Year, searches to add to his resume as he advances through match play.

The Round of 32 was headlined by many upsets including the number 32 seed, Matthew Marino, defeating the number one seed, Matt Broome.  Past Champions, T J Shuart, Steve Carter, and Chip Brooke advanced to hunt down another Mid-Amateur victory. Marc Dull, 2017 Player of Year, prevailed with a one-up victory over 2016 Player of Year, Joe Alfieri. A silent competitor, Devin Hernandez, defeated number nine seed, Drew Isaac, 5 & 4, to play Saturday morning!

The seedings for the Round of 32 have been determined at the 37th Mid-Amateur Championship held at Coral Creek  Club located in Placida. After 36 holes of stroke play qualifying, 32 players have advanced to match play and matches are currently underway, including a matchup of the previous two Players of the Year, Joe Alfieri and Marc Dull!

Round one concluded with a tight race at the top of the stroke-play leader board. Scott Turner, 2017 Amateur Public Links Champion from Stuart, tied Matt Broome, and Michael Sullivan for the early lead.  The three leaders posted an impressive score of four under-par 67. Lurking close behind in fourth place at 68 (-3) is 2015 Mid-Amateur Champion, T J Shuart of Fort Lauderdale.  Four players tied for fifth place at 69 (-2), two players followed at one under-par, and 10 players finished round one at even par. The top Mid-Amateur golfers in Florida would face tough competition in the final round of stroke play on Friday morning.

The second round began with an early shotgun start to finalize the top 32 players proceeding to match play in the afternoon. Matt Brome, of Jupiter, bettered his stroke play finish from last year by eight strokes and finished as medalist. Broome played strong in round two to finish with a 68 and 135 (-7) stroke play total. One stroke behind, tied for second, placed Michael Sullivan and Scott Turner. Several notable names finished at the top of the leaderboard including past Mid-Amateur Champions, Robert Bechtol, Chip Brooke, T J Shuart, Steve Carter, and Joe Alfieri. 2017 Amateur Player of Year, Mid-Amateur Stroke Play Champion, and U.S Four-Ball semifinalist, Marc Dull posted rounds of 76-69—145 to finish in the top 32 players. Pete Williams, of Juno Beach, is another successful force who was named Senior Player of the Year  in 2014.Ten players finished stroke play in red numbers heading into match play.

The 83-man field was trimmed to 32 after two rounds of stroke play, but five players tied for 32nd  at five over-par, calling for a playoff for one spot before match play kicked off Friday afternoon. Matthew Marino, Tyler Manning, John Breedlove, Derek Camps, and Taylor Hall played off for the 32nd seed with Marino advancing to play Matt Broome in the round of 32.

The Mid-Amateur Champion will earn 5,000 points in the race to Player of the Year. Click here for the latest rankings and here to view the point system for the Mid-Amateur.