DAYTONA BEACH, Fla. – Derek Hurwitch and Douglas Schneider captured the Two-Man Shoot-Out on Sunday at LPGA International, posting a 14-under 202 for the championship. The team recorded back-to-back rounds of 65 to secure the three-shot lead and the first Florida State Golf Association win for both players. 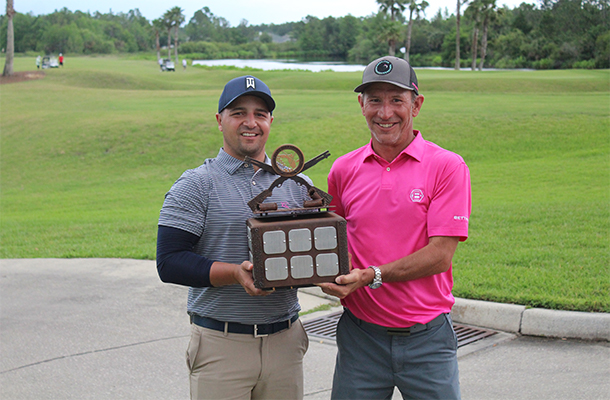 The championship began on Saturday with team members competing in modified alternate shot. Only two teams carded under-par round on Saturday morning. James Kemp and Brad Quiri posted three birdies and two bogeys in the first round to post a 1-under 71.

Deeter Arnold and Colton Godwin also shot a 1-under 71 in the first round, with five birdies, two bogeys and a double bogey. Eight teams posted an even-par 72, including Hurwitch and Schneider.

The teams competed in the scramble portion on Saturday afternoon. Brett Riotto and Brent Smith shot the low round with an 11-under 61. The pair carded a bogey-free round with 11 birdies, including four straight to close out the round. Chip Minick and Will Short Jr. turned in a round of 10-under 62, birding six holes on the back nine. Hurwitch and Schneider recorded a 7-under 65 in the four-ball portion, with seven birdies.

The championship finished with a Four-Ball on Sunday. Hurwitch and Schneider secured their win at LPGA International with another 7-under 65. Bob Campione and current FSGA president, Steve Carter finished three strokes behind the champion, with a final round 3-under 69.

The men’s schedule will continue with the Mid-Amateur Championship on May 16-19 at Quail Valley Golf Club in Vero Beach.