Nicholas Gabrelcik earns first FJT win of the year with a four under-par final round. 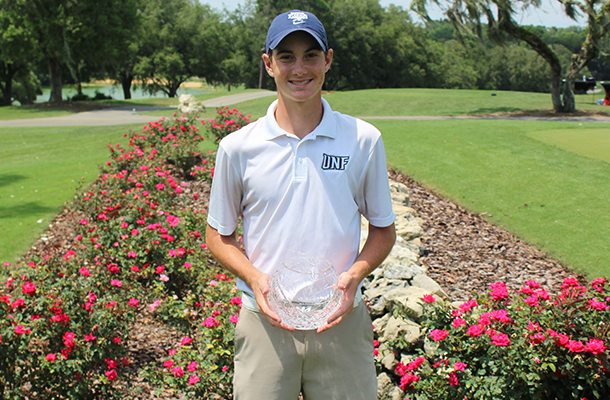 Lecanto, Fla. – Nicholas Gabrelcik, of Trinity, posted the tournament low in his final round to claim first place at Black Diamond Ranch on Sunday.

A three-way tie at the top made for an exciting final round for the Boys 16-18 division on the picturesque Quarry Course at Black Diamond Ranch. Despite a suspension due to inclement weather, Gabriel Restrepo, of Winter Garden, Davis Lee, of Ponte Vedra Beach, and Bryce Walker, of Bartow, tied for the lead with a round one score of even-par 72. Five players lingered close behind at one over-par heading into the final round.

2018 Amateur Match Play Champion, Gabrelcik, fought his way up the leaderboard in round two, erasing his one stroke deficit. Gabrelcik birdied his second hole and held onto that momentum into the back nine where he carded four birdies for a 32 and four-under 68 second round. A three-under 141 total for Gabrelcik secured his first FJT victory of the year by four strokes and his third FJT win at Black Diamond Ranch. Walker posted a one-over 73 in round two to finish tied for second with Lucas Cena, of Winter Garden, at one-over 145.

Consistency secured Patrick McCann, of Tallahassee, a fourth place finish with two rounds of 73 for a two-over 146  total.

Follow the FJT:
The FJT schedule will continue at Rio Pinar Country Club, in Orlando, for the 16-18 division and 9-12 division at Sandridge Golf Club, in Vero Beach, May 18-19.