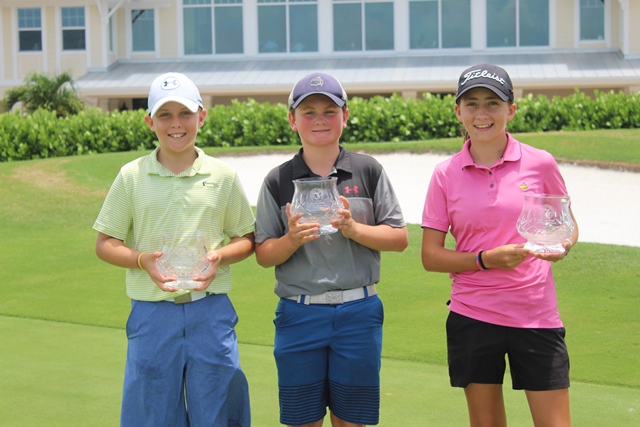 ENGLEWOOD, Fla. – The future of the game was won with impressive red numbers from Tyler Chapman, Jessy Huebner, and Katelyn Huber at Lemon Bay Golf Club.

Despite a forecast of thunderstorms hanging above the Futures Championship, the juniors dominated with impressive play in the 9-12 division. A total of eleven under-par rounds were posted under clear skies and windy conditions. Lemon Bay Golf Club was a great host for the future of the game.

It came down to the final round to determine the Boys 11-12 champion after Phillip Dunham and Matvey Golovanov tied for the lead after a round one score of 69 (-3). Dunham, of Jacksonville, started his first round with four birdies on the front nine and finished with an eagle on the par five 16th hole. Boca Raton resident, Matvey Golovanov, played a consistent first round with three birdies and one lone bogey.

Sunday’s final round was a back and forth battle between the top three finishers after round one; Golovanov, Dunham, and Chapman. Dunham struggled making bogey on the first three holes of his second round but fought back making a birdie on the par three, fifth hole. Two bogies and two birdies made up Golovanov’s first nine holes while Chapman started to make his comeback with one birdie and eight pars on the front nine. Finishing with an even par, one bogey and one birdie, back nine, Dunham carded a final round 74 to fall to a tied for third place finish with Mateo Desmond and Nicolas Bencomo. The finishing holes were a battle between Chapman and Golovanov. The two battled back and forth to enter the 15th hole at a tie. On the 16th hole, both Chapman and Golovanov hit their tee shots in the right fairway bunker and their approach shots on the green in regulation. Golovanov two putted to par the hole and Chapman made a 10-foot putt for birdie to start the last two holes in the lead by one stroke. Both players scored a par on 17 and 18 to crown Chapman Futures Champion with a final round 69 and 139 (-3) finish. Golovanov finished in second place with a final round of 71 and 140 (-2) total. Chapman secured his first FSGA victory by overcoming a one stroke deficit to win!

Jessy Huebner, of Port Saint Lucie, erased a two stroke deficit to earn his sixth FSGA win in the Boys 9-10 division! A first round of three birdies and all pars secured the early lead for Miles Russell, of Jacksonville Beach. Luke Parsons, of Salley, SC, finished his first round one stroke behind with a 69 after carding four birdies. Eventual champion, Huebner, started the final round in third place after a first round 70. Russell got off to a rough start making the turn with a 41 to finish in third place at 146 (+4). Parsons carded three birdies and three bogies in his final round to finish in second place with a 140 (-2) total. Huebner held his ground and played near flawless golf with three birdies and one bogey in his final round to advance to first place. A 139 (-3) total allowed Huebner to hoist the first place trophy!

Records were broken in the Girls 11-12 division by Katelyn Huber, of Gainesville. Huber dominated the field with a wire-to-wire victory after taking the early lead due to a round one even par 71. Kayla Bryant and Arenui Faana posted a first round 74 to follow Huber in second place. The final round was played lights out by Huber as she carded the tournament low and her personal lowest score of 65, six under-par. Huber’s final round scorecard was highlighted with eight birdies, five of which were posted on her final nine holes. Huber won her second FSGA event by scoring her lowest 36-hole total of 136 (-6). Sophia Stiwich, of North Port, finished with a one under-par 70 to claim second place with a 145 (+3) total, nine strokes behind. A 148 (+6) total earned Angela Nip, of Port Saint Lucie, a third place finish while Bryant and Faana finished in fourth and fifth place respectively.