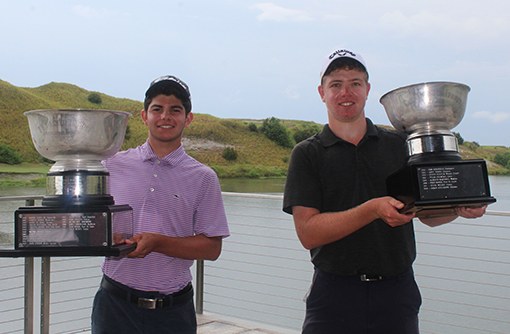 STREAMSONG, Fla. – Both finishing the final round with eight birdies, Justin Ross and Dean Greyserman captured the 65th Boys’ Junior Amateur Championship on Sunday at Streamsong Resort. Ross won the 16-18 Division, while Greyserman was victorious in the 13-15 Division.

Beginning the day three shots back of the leaders, Ross got off to a tremendous start, birding four of the first six holes. He added another birdie on the ninth hole to play the front nine bogey free. The Boca Raton native added three more birdies to head to 18th hole at 7-under for the day.

With a bogey on the final hole, Ross posted a final-round 6-under 66, the low round of the championship. He held the clubhouse lead, tied with Stewart Slayden, who still had two holes left to play.

Slayden, who began the day in a tie for first place, recorded a bogey-free front nine with two birdies.  He birdied the 16th hole to move into a tie for first place with Ross. The Ponte Vedra Beach native hit his approach shot out of the rough on to the green, left with a 20-foot birdie putt to win the championship.

After an hour weather delay, Slayden three-putted to bogey the final hole and secure the win for Ross.

Slayden and Jonah Leach finished in a tie for second place at 6-under 210. Leach finished the final round with a 3-under 69, including a bogey-free back nine.

Greyserman, who began the day in a tie for first with Parker Bell, started off hot start, birding the first three holes. He carded a 3-under for his front nine to remain in a tie for first with Bell. He continued his strong play, with birdies on four of the next five holes on the back nine to extend his lead to five shots. He finished the day with a 5-under 67.

The Boca Raton native secured his first FSGA Championship title with a 10-under 206 for the championship. Greyserman, who was playing in his first Boys’ Junior Championship, is the only player in the 13-15 field to put together three under-par rounds, 71-68-67—206.

Parker Bell, Will McGriff and Jay Brooks all finished in a tie for third place at the 5-under 211. Bell started the day in a tie for first place and played his front nine bogey-free with three birdies. He stumbled a bit on the back nine and finished the day with an even-par 72.

The junior schedule will continue next week with the Junior Amateur Match Play on July 15 - 18 at Mission Inn Resort in Howey-in-the-Hills, Florida.