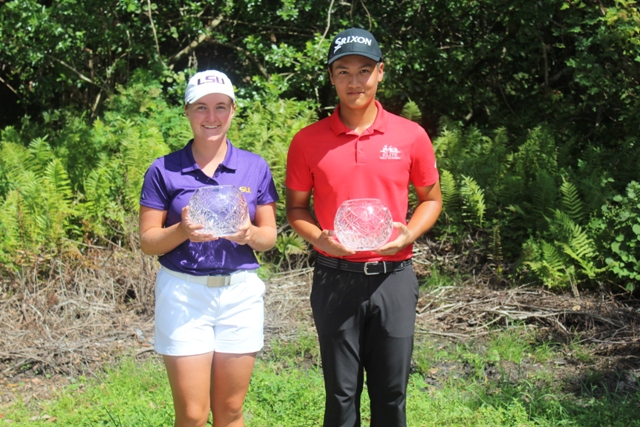 Siyuan Lyu, of Lake Mary, came out strong in round one with a bogey-free 66 consisting of four birdies and one eagle to take the round one lead over Hunter Holloway, of Tampa. Holloway also had a strong round one after shooting 67, with seven birdies including three in a row on his first three holes, and two bogeys. Round two turned into an all out birdie fest with nine players shooting under par.  Bryce Walker, Kiko Francisco Coelho, and Alexander Waller all stayed consistent  throughout their second rounds to finish in a tie for third. Austin Cherichella, of Orlando had the low round of the day by sinking two birdie putts, one eagle putt, and then holed out on hole 14 from 215 yards out for an Albatross! Cherichella bogeyed the final hole to shoot 66 and ultimately came up one short of the win. Lyu went on to shoot a final round of one-under, 71 to clinch his first Florida Junior Tour win.

Lauren Clark, of Orlando, came out hot in her first tournament since recently committing to Louisiana State University. She started off her first round with a birdie on 1 and then went on to have four more birdies throughout the remainder of round one. Close behind was Taylor Zeng who had a rocky start to her round, bogeying two of her first four holes. Zeng was able to reset and bounce back by sinking a birdie putt on hole 6 and then went on to card three more birdies on her back nine to shoot a two-under, 70, just two behind Clark. Right behind Zeng and Clark was Madison Hewlett who carded a one-under, 71. During the front nine of round two, Clark carded two birdies and one bogey to shoot one-under 35. On the back nine, Clark continued her momentum and carded another four birdies to sink a total of 11 birdies throughout the tournament. Both Zeng and Hewlett continued their consistent play with rounds of 71 and 72 respectively. Clark was able to secure her first win on the Florida Junior Tour since December of 2018 by four strokes.