After taking the lead after Day 1, Team FL faltered and fell to a hot Georgia Team, finishing 2nd in the Southeastern Challenge Matches 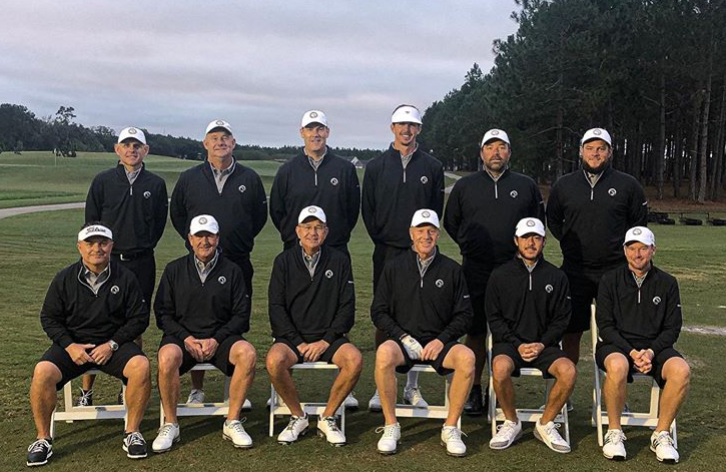 Team Florida, comprised of the top Mid-Amateur and Senior Amateur golfers in the state, finished 2nd in the biennial team matches. Team Georgia won the competition with 25.5 team points, to Florida's 21.5, while Team Alabama finished 3rd with 16 points. Team Florida was lead by Jimmy Jones, Sr. of Tampa, going 5-0, moving his overall eastern Challenge Match record to 11-3-1, and 9-0-1 in his last two appearances for Team Florida

Session one, on Sunday morning, the Four-Ball Matches, saw 9 points up for grabs, with 3 AL vs. FL matches, 3 AL vs. GA matches, and 3 FL vs GA matches. Team Florida posted 4 of a possible 6 points. The teams of Pete Williams / Don Whittemore and Chip Brooke / Mark Dull, earned wins over opponents from Alabama, while Mike Finster / Jimmy Jones, Sr earned one point with a win of their foes from Georgia. The additional point was picked up with two halves vs. Georgia by the teams of Steve Carter / Scott Turner and Jordan Batchelor / Devon Hopkins. The Batchelor / Hopkins match was the highlight of the morning session, with Batchelor / Hopkins 2 up, thru 14, their opponents birdied the final four holes, to be matched by birdies by Batchelor / Hopkins on 15 & 17, to hold on for a half point. Both teams carded 63 (-9) with normal match play concessions.

Session two, on Sunday afternoon, provides possibly the uniquest format of the Challenge Match. Each group has 6 players, 2 per team, playing true alternate-shot (foursomes), in a three-ball match. AL vs. FL, AL vs GA, & FL vs. GA, with 18 points up for grabs. Team Florida took control of this session and posted 9 of a possible 12 points, going 5-1 vs Alabama and 4-2 vs Georgia. The teams of Mike Finster / Jimmy Jones and Chip Brooke / Marc Dull went 3-0 on the day, earning 3 points, while the pairs of Steve Carter / Scott Turner and Jordan Batchelor / Devon Hopkins went 2-0-1 earning 2.5 points for the team.

Session three, on Monday morning, see the most points up for grabs. Twelve groups of three head out, with each player having an individual match vs his opponent from the other two states. 36 total points are up for grabs, with the most any state can earn in this session is 24. Due to the unique format of the matches, there is no magic number like the Ryder Cup, that clinches victory, but team Florida went out in the morning, knowing if each player could earn one point, they would be in the driver's seat with the 5 point lead and traditionally only the winning team scoring over 24 points.

Georgia would come out firing. As matches made the turn, there was an abundance of Red (Georgia) on the board, with sprinkles of Green (Alabama) and Blue (Florida). A lot of close matches and tied matches that could easily flip, and the back nine would decide the matches. As matches completed, Georgia points would quickly go up on the board. With two groups remaining on the course, it became mathematically impossible for Georgia to be caught, and they locked up their second straight Southeastern Challenge win. Georgia would go 10-2 vs Florida and 7-4-1 vs Alabama to amas 17.5 points in the Singles session. Team Florida only picking up 2 points vs Georgia, would go 6-5-1 vs Alabama, totalling only 8.5 points of a possible 24.

With the victory, Georgia ties Florida in the overall series with eight victories, while Alabama has one. The 18th Men's Southeastern Challenge Matches will be contested in October of 2021, at Willow Point Golf & Country Club, in Alexander City, AL, where Team Florida will look to regain the lead in the series, and return the trophy to Florida.