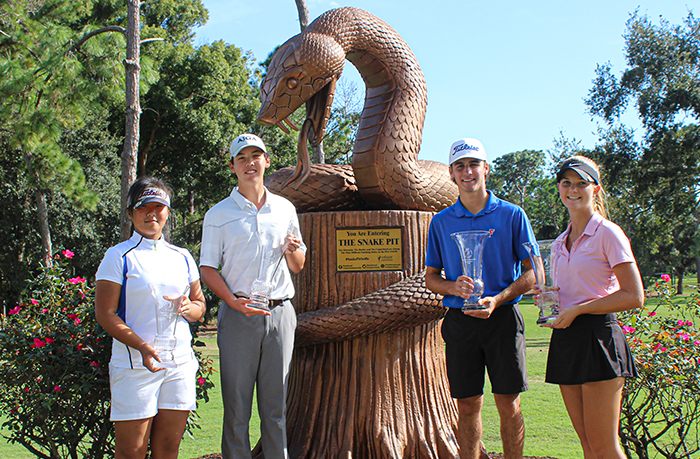 PALM HARBOR, Fla. – After battling Innisbrook’s Copperhead and Island Courses, four players were crowned champions at the Florida Junior Tour Championship on Tuesday. Will McGriff captured the Boys 16-18 division, while Justin Sui took home the Boys 13-15 title. On the girls’ side, Jacqueline Putrino won the 16-18 trophy, and Mi Li secured the 13-15 title.

McGriff secured the win in the Boys 16-18 division, carding a 1-under 214 for the three-day championship. The Ponte Vedra Beach native fired a second-round 67 on the Island Course to move to the top of the leaderboard on Sunday. He began the final round with a two-stroke lead over the field.

The 2022 graduate started the day on Copperhead with two birdies on the front nine and added another on the back nine. McGriff secured a six-stroke victory with a par on the final hole and finished the round with a 2-under 70. His 1-under 214 for the championship was the only under-par score in the field.

Austin Cherichella and Nicholas Gabrelcik both posted red numbers in the final round to finish in a tie for second place at 5-over 220. Cherichella used a bogey-free front nine and two birdies on the back to finish with a final-round 2-under 70. Gabrelcik recorded the low round of the day to move five spots up the leaderboard. The 2019 Boys’ Junior Player of the Year carded a bogey-free front nine and finished the day with three birdies.

Sui recorded a final-round 3-under 68 on Tuesday to earn the win in the Boys 13-15 Division. He entered the final round in a tie for fourth at 12-over 156 and five shots back of the leader. After a bogey on the second hole, the Michigan native birdied four of his next six holes to head to the back nine at 3-under.

He added another birdie and bogey on the back nine to secure a four-stroke victory at 9-over 224. Sui’s final-round 68 was the only under-par round in the Boys 13-15 Division over the three-day championship.

Maxmilian Jelinek took home a second place finish with a 13-over 228, while Jake Manelas and Carson Brewer finished tied for third at 16-over 231.

Putrino took home the title for the Girls 16-18 division, finishing the championship at 1-over 216. Heading into Monday’s final round, she sat three shots back of the leader in third place. Putrino started the day with a bogey-free front nine before birding her first hole of the day on the 10th.

The Sarasota native finished the day with three birdies to post a 3-under 69 and secure a five-stroke victory. Her final-round 69 was the low round of the day in the Girls 16-18 Division. Madison Tenore took home second place with a 6-over 211, while Andie Smith finished one shot behind Tenore at 7-over 222.

Li captured her fourth victory of the season with a win the Girls 13-15 division, posting a 2-over 217 for the championship. After the second round, she sat just one shot behind the leader in second place. The Orlando native used the low round of the day, 2-under 70, to secure the four-shot win. Li carded five birdies in the final round, including birding four of five holes to close out the front nine and start the back.

Bridget Ma finished second with a 6-over 221, while Kaitlyn Schroder took third place with a 7-over 222.