Three prevailed through cool temperatures and tough competition to win the final FJT (9-12) of 2019! 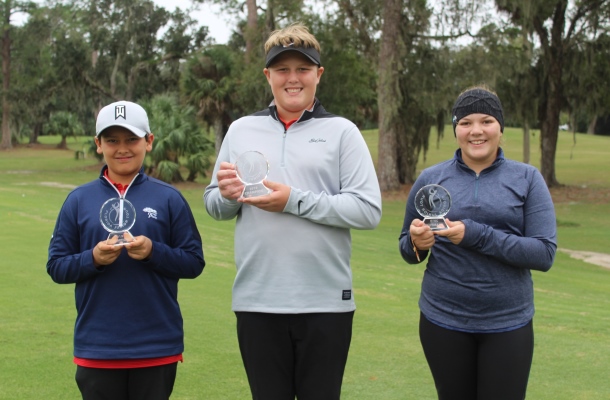 Boys 11-12
Phillip Dunham, of Ponte Vedra Beach, captured back-to-back victories in the 11-12 division, after winning the FJT at Fairwinds GC in October. A one under-par first round of 70 from Dunham and Emile Lebrun, of Port Saint Lucie, led to a tie at the top. Dunham and Lebrun would start round two one stroke ahead of Mateo Desmond and Matvey Golovanov who tied for second.

Despite starting the second round with a bogey, Dunham began to pull away from the field early in his round. Dunham birdied holes three through five, eight, and nine. He then continued with steady play on his final nine holes to post the tournament low round of 69. Dunham secured a four stroke lead, at five under-par 139, to win the final FJT (9-12 division) of 2019! Lebrun finished tied for second with a final round of 73. Jessy Huebner, of Port Saint Lucie, played consistent golf to tie Lebrun in second. Huebner finished in red numbers with rounds of 72-71—143.

Boys 9-10
Round one ended with a tie for the lead between Jaden Peterson and Jude Desmond who both finished at three over-par 75. Three strokes back in second place was Clearwater native, Jake Spindler. Peterson was vying for his first FJT win in his first year playing on the tour.

Two bogies on the front and back nine of round two led to a 76 and three stroke victory for Peterson, of Port Saint Lucie. Peterson finished at seven over-par 151 to win his first FJT by three strokes! Orlando resident, Arya Patel, finished his second round four strokes better than round one to claim second place with scores of 79-75. Spindler rounded out the top three in third place after a second round of 80 and 158 total.

Girls 11-12
Ryleigh Knaub, of Winter Springs, was on the lookout out for her first win after taking the round one lead by three strokes at two over-par 74. Knaub was on fire in round two, posting two back-to-back birdies on holes three and four and finishing with two more birdies on the final nine holes. A final round three under-par 69 gave Knaub a final score of one under-par 143 and wire-to-wire victory!

Nine strokes back, in second place, finished Madison Moman, of Palm Beach Gardens, with a 152 total. Moman carded two birdies in her final round to finish two strokes better than her round one 77. Consistent rounds of 79-78 from Abigail Smith gave her a third place finish at 157.