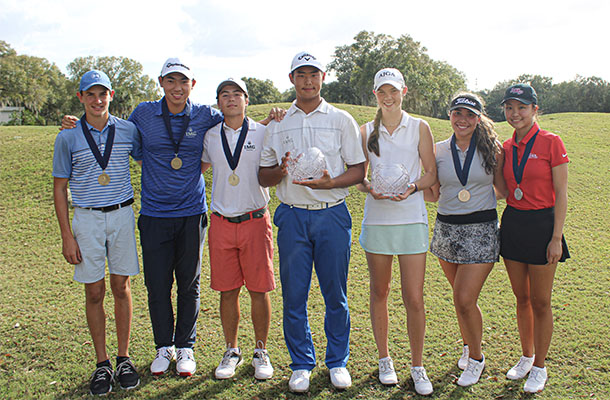 RUSKIN, Fla. - Xirong Cheng and Jordyn Hodgson started their seasons with victories on Sunday at Cypress Creek Golf Club. It was the first Florida Junior Tour win for Cheng, while Hodgson earned her second FJT victory.

Cheng earned his first FJT win on Sunday with a 1-under 143 for the tournament, the only under-par total in the division. After a first-round 76, the Bradenton native started the final round five shots back of the leader. He started the day with a bogey-free front nine, carding two birdies. Cheng birdied three-straight holes on the back nine to move into first place.

The 2021 graduate birdied the final hole to capture the victory. Cheng fired a final round 5-under 67 in the final round, the low round of the weekend.

Nicholas Estrada took home a second-place finish, posting an even-par 144 for the weekend. The Bradenton native, who began the final round in second place, was the only player in the field to post two rounds at even-par or better.

Kuangyu (Tony) Chen and Duncan Fischer finished in a tie for third place at 1-over 145. Both players carded a final round 2-under 70.

Hodgson survived a playoff to pick up the win on Sunday, her second FJT victory. The Orlando native sat in a tie for second place heading into the final round, after posting a first-round 78. Beginning the day on the 10th hole, Hodgson carded five pars and headed to her second nine at 10-over.

The 2021 graduate posted three birdies on the second nine to finish the final round at 9-over 153 and in a three-way tie for first place. Hodgson pared the first playoff hole to defeat Izzy Pellot and Ellen Dong and earn the win.