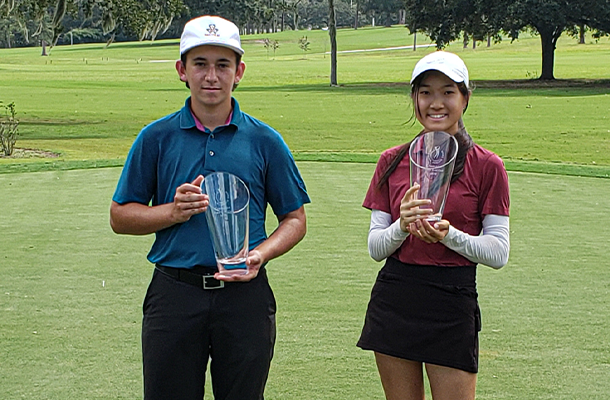 OCALA, Fla. – Nicholas Prieto and Elan Zhang picked up Florida Junior Tour wins on Sunday at Ocala Golf Club. Prieto earned the in the Boys 13-15 Division, and Zhang was victorious in the Girls 13-15 Division.

This is the third FJT victory of the season for Prieto, while Zhang becomes a first-time FJT winner.

Prieto captured his third FJT win in wire-to-wire fashion, finishing the weekend at 9-under 135. The Miami native began the weekend with a bogey-free first round with four birdies on his way to a first-round 68. He took a two-shot lead over the field into the Sunday’s final round.

Prieto’s only bogey of the weekend came on the second hole of the final round. He added a birdie on the seventh to make the turn at even par for the day. The 2023 graduate caught fire on the back nine, carding five birdies, including three-straight on Nos. 13-15. His final-round 67 was the low round of the tournament and secured him the seven-shot victory.

Cody Tucker took home second place at 2-under 142. The Atlantic Beach native used a 70 in the final round to earn a runner-up finish. James Hassell finished third at 1-under 143, while TJ Thompson and Shawn Coultoff tied for fourth at even-par 144.

Zhang survived a playoff to capture her first FJT victory on Sunday at 4-under 140. The Orlando native took the first-round lead on Saturday with a 2-under 70, carding five birdies. She held a one-shot lead over the field heading into the final round.

Beginning the final round on the 10th hole, Zhang got off to a solid start with two birdies on the front side. She ran into some trouble on 18, finishing with a double bogey to move back to even par for the day.

Zhang rebounded quickly, birdieing two of her first three holes on the back side. She posted another 70 to finish the tournament at 4-under 140 and in a tie with Sabree Lefebvre.

On the first playoff hole, Zhang made par to secure the victory. Lefebvre finished second, after putting together rounds of 71-69. Zhang and Lefebvre were the only two players to finish under par and post two under-par rounds for the tournament.

Kate Barber took home third place at 3-over 147, while Katelyn Huber finished fourth at 7-over 151.