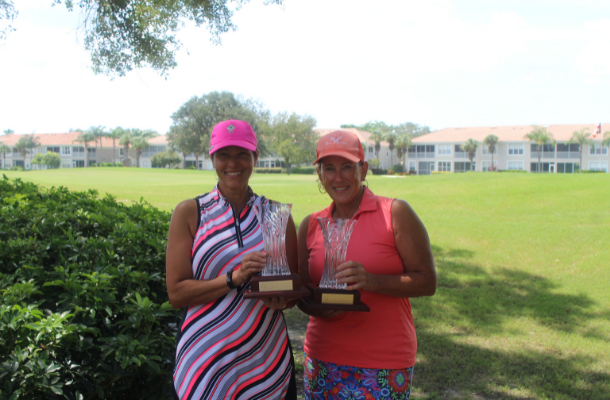 BONITA SPRINGS, Fla. – Nancy Bradley prevailed after a tie for the lead in the Middle Division while Sonia Frederick captured the Forward Division at Spring Run Golf Club.

The final round was nearly identical to the finish of the 2020 Women’s Net Championship. Nancy Bradley, of Naples, and Melanie Clegg, of Merritt Island, finished tied for the lead for the second back-to-back year. This year, Clegg and Bradley played a second round to reach a tie at the top after Tropical Storm Sally shortened the championship to 18 holes in 2020.

Defending champion, Clegg, posted two impressive net eagles on the second and tenth hole in round one to finish in second place, three strokes back. Naples resident, Kerstin Koenig, took the early lead, posting two gross birdies on the back-nine, to finish at five under-par 67. Bradley finished in fourth place after a round one even par score, one stroke behind Gayle Erickson in third place at one under-par, 71.

A consistent back-to-back 72 from Bradley in round two, moved her into a tie for first with Clegg at an even-par total of 144. Bradley stated that she “felt comfortable both days” on the golf course. A scorecard playoff, starting with the final 18-hole net score, crowned Bradley champion. This marks Bradley’s first FSGA Championship victory after finishing second in 2020.

Cheryl Sadlon claimed the win in the Middle First Flight by four-strokes. Sadlon, of Palm Beach Gardens, erased a one stroke deficit after a first round 69 (-3) to finish in first with a one over-par 145 finish.

Red numbers highlighted the top of the leaderboard in both round one and two for a tight race to the win. Claire Dedow, of Naples, secured the tournament low round of six under-par 66 to lead by four after round one. Orlando resident, Sonia Frederick, played a strong final nine holes in round two to climb to the top. Frederick finished two strokes better in round two, posting a four under-par 68, to capture her victory with a 138 (-6) total. Linda Davis, of Plantation, matched Frederick’s round two 68 to finish one stroke back in second place after a round one 71.

Barbara Ulch, of Jacksonville, erased a six stroke deficit, after a round one 78, to win the Forward First Flight by one stroke. Ulch was on fire in round two, finishing with a five under-par 67 to take first place with a one over-par 145 total. Catherine Saenz, of Saint Petersburg, claimed second place with rounds of 72-74 for a 146 total.