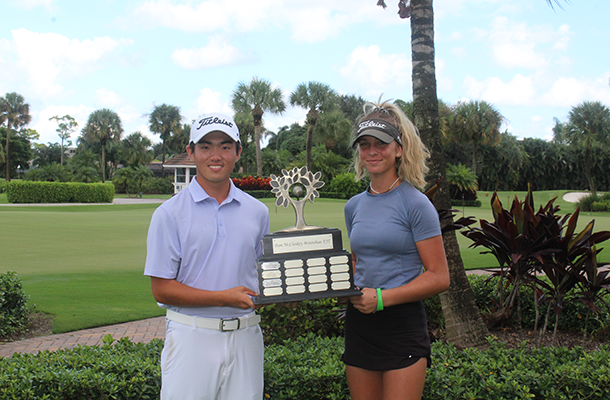 The FJT Pam McCloskey-Brosnihan tournament is held each year to honor the former Quail Ridge Head Golf Professional, Pam McCloskey-Brosnihan, who passed away in 2014 at the age of 51 from cancer. Her memory is honored each year with a FJT event and the FSGA offers a scholarship in her name to a local junior who demonstrates determination, drive and passion for the great game of golf.

Xu earned the victory in the Boys (16-18) division with a 7-under 137 for the weekend. He got the weekend started with a 2-under 70 in the first round, finishing Saturday with a bogey-free back nine and three birdies.

The Windemere native sat two shots back of the leader at the start of the final round. Xu got off to a hot start with three-straight birdies on Nos. 2-4. He finished the font side bogey free and kept it going on the back. He secured the win with a bogey-free 67 to secure the two-shot victory.

Kelvin Hernandez took a runner-up finish, putting together rounds of 72-67 to post a 5-under 139. Xu and Hernandez carded the low rounds of the weekend with a final-round 67. Andres Barraza used rounds of 71-71 to earn third place at 2-under 142.

Fischer captured her second-straight FJT victory in wire-to-wire fashion, finishing the weekend at 4-under 140. She took a share of the first-round lead with a 2-under 70. Fischer had a stellar back nine on Saturday, birdieing five of seven on Nos. 11-17.

After a bogey to start the final round, she carded two birdies on her first nine and added two more on her second. She secured the two-shot victory with a final-round 70. Fischer was the lone player in the division to card two under-par rounds for the weekend.

Nicole Gal used rounds of 72-70 to earn a second-place finish at 2-under 142. Fischer and Gal were the only players in the division to finish under par or better. Ryleigh Knaub finished third at 1-over 145 with rounds of 70-75.