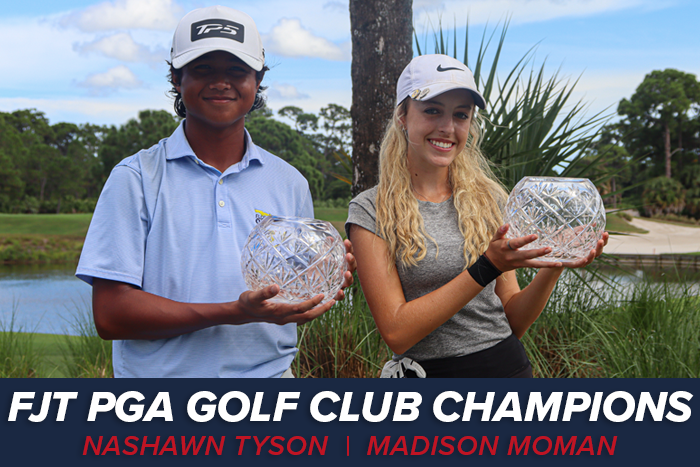 Tyson started his 54-hole tournament with an opening round 2-under par 70 to leave him in a tie for second place. He bested his opening round on day two with his 4-under par round of 68. Tyson found himself still in a tie for second heading into the final round. Within striking distance of the lead, Tyson and James Earle battled it out for first place. With three birdies in his last five holes, Tyson closed strong to capture a three-stroke victory and his first FJT victory.

Earle put together an impressive final two rounds enroute to his second-place finish. After an opening-round 72, Earle found himself in a tie for eighth place and five shots off the lead. Earle’s FJT Major Campaign consisted of fifteen birdies, which was tied for the most made throughout the field.

Zhengyi (Louie) Liu started his tournament with an excellent opening round of 5-under par 67. Liu played consistently the following two days with rounds of 72 and 70 to firmly secure his third place finish.

Moman picked up another victory this weekend after shooting a three-day total of 1-under par 215. This is back-to-back, wire-to-wire victories for Moman as she adds to an impressive playing resume for the 2022 season. Moman kicked off her tournament with a 3-under par 69 to give her a five-shot lead right out of the gate. While the field narrowed the gap in round two, Moman maintained her lead for the final day. Moman never wavered and put together a final-round  72 to take home the three-shot victory.

Finishing in second place was the Gainesville native, Brayden Smith. Smith put together rounds of 74-71-73 to claim second place by one over Victoria Tan. Smith’s tournament was highlighted by eleven birdies, four of which came during her second-round 71.

Tan took home third place this weekend after shooting 75-69-75. Tan started the final round only one shot behind Moman. Tan’s second round 69 tied Moman for the low round of the tournament in the Girls Division.