On Friday, November 21, 2014, the Florida State Golf Association inducted two new members into its prestigious Hall of Fame. The ceremony was held at Palma Ceia Country Club, in Tampa, in conjunction with the Annual Dinner. Fred Ridley was born in Lakeland, Florida and currently resides in Tampa where he is a partner of Foley & Lardner, an international law firm. In 1974 he graduated from the University of Florida where he played on the golf team and later graduated from Stetson University College of Law in 1977. He began his business career in Cleveland, Ohio at International Management Group but moved back to Florida where he made his lasting impact on golf.

Fred has been an exceptional amateur golfer all of his life. He played in 15 USGA Championships, including ten U.S. Amateurs. In 1975, Fred won the U.S. Amateur and the following year was selected to compete on the USA World Amateur team. After playing on the USA Walker Cup team in 1977, Fred became captain of the team in 1987 and 1989. Fred competed in the British Amateur in 1977 and 1987. He played in the Masters three times, and the U.S and British Open once.

In addition to being a fine player, Fred has served the game as chairman of the USGA Championship Committee, Amateur Status Committee, and International Team Selection Committee. For 12 years, he was a member of the USGA Executive Committee and served as President in 2004 and 2005. During his two years as President, Fred extended the USGA’s relationship with NBC Sports, raised funds for tsunami relief, and worked to involve kids with disabilities in golf.

Following his two years as USGA president, Fred serves as the Competition Committee Chairman for the Masters Tournament. Fred continues to be an active golfer, and with his wife, Betsy, has three children, Maggie, Libby, and Sydney. 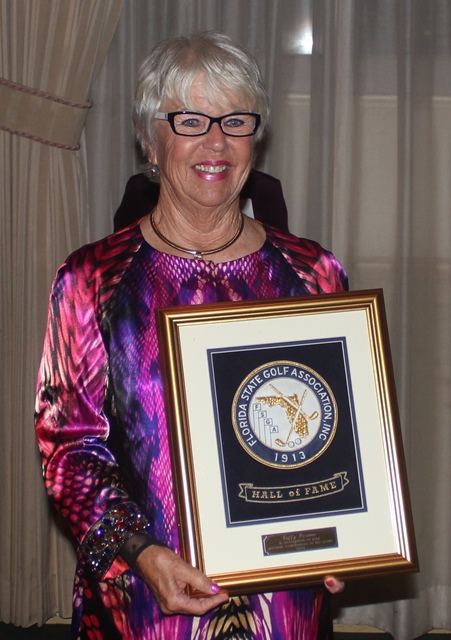 Taffy Brower was born in Rochester, New York where she began playing golf at the age of seven. Taffy fell in love with competition and was the Women’s Rochester District Junior Champion three times. In 1969, she finished runner-up in the New York State Women’s Amateur at the age of 18. During the next ten years, Taffy played sparingly while raising her two children, Aaron and Kristen, with her husband Buzz.
Taffy returned to competitive golf and moved to Florida. Taffy has captured 24 victories in Palm Beach County, including seven Palm Beach County Women’s Amateur Championships, six Tri-County Championships, and four West Palm Beach City Championships.

In 2004, Taffy earned the first Florida Women’s State Golf Association Player-of-the-Year award. In that year Taffy won both the Southern Amateur and Southern Senior Amateur Titles. When she isn’t preparing for her next tournament, Taffy enjoys spending time with her family and attending church.