On the 11th hole of the second round of The Barclays a few weeks back, Seung-Yul Noh played his second shot from the putting green of the 3rd hole. That resulted in one of the more uncommon breaches of a Rule that you will likely encounter and a two-stroke penalty in stroke play. He breached Rule 25-3; Wrong Putting Green. 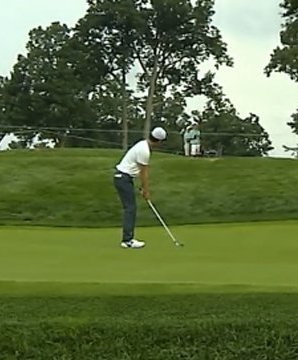 If you look up “wrong putting green” using the index or the table of contents in the Rule Book, it will lead you to Rule 25 and specifically the third section of Rule 25, which deals with a wrong putting green and how to proceed.

First, find out what is a wrong putting green?

By definition, a “wrong putting green” is any putting green other than that of the hole being played. Unless otherwise prescribed by the Committee, this term includes a practice putting green or pitching green on the course.

Next, determine if interference exists?

Since his ball lies on a wrong putting green, interference does exist.

Finally, take relief as prescribed if interference does exist?

(Rule 25-3b) If a player has interference by a wrong putting green, the player must take relief, without penalty as follows:

Since he had interference, he was required to take relief by dropping his ball without penalty within one club-length of his nearest point of relief no nearer the hole.

As a result of not taking the required relief, he incurred the general penalty of two strokes in stroke play.