It began more than 100 years ago in a quiet little town on the bay called Tampa. A gentleman by the name of A.C. (Al) Ulmer from Jacksonville, along with his golfing and socializing cronies, decided it was time to organize amateur golf including an annual championship event. This would bring all the quality players in the state together at least once a year. A true test of one’s ability going against the best. After all, golf had been played in Florida for over a hundred years, even since Gillespie introduced the game to us in Sarasota in 1886. It was time, so Al Ulmer was elected president and the Florida State Golf Association was formed. Its purpose: to improve, preserve, and promote the game of amateur golf while holding a state championship.

Since that first contest some of the great names of amateur golf have carried the Florida title. In fact, A.C. Ulmer went on to win four more state titles, probably just to show that it wasn’t a fluke winning the championship he helped to create. Other notable winners were: Gordon Gibbons, Jack Toomer, Carl Dann Jr., Bobby Doak, and Don Bisplinghoff who won the first of three consecutive championships, Doug Sanders, Frank Strafaci, Al Kelley, Jr., Bob Murphy, John Darr, Jack Veghte, Bob Rankin, Gary Koch, Jerry Pate, David Peoples and Rick Pearson. Florida’s champions seem to be destined for professional greatness, as many have become successful touring pros. All championships through 1960 were match play. The last State Amateur to be a match play contest was held at the Old Gainesville Golf and Country Club, now the University of Florida’s course. The final day was a scheduled 36 holes.

Quality champions didn’t just happen, quality leadership assured it. The Florida State Golf Association has been blessed with great leadership. Our history would be assured. Our leaders in their own right were champions, some were even crowned. The tradition continued through the energies of past Presidents like Roland Arnold, the kind and gentle man from Vero Beach, Bill Carey, twenty years as executive director and winner of the “Fairway Award,” Billy Watts, St. Petersburg; M.T. McInnis; Dexter Daniels, Jr., Winter Haven; Bob McCullers, Leesburg; Bob Dolci, Port Malabar; Nate Schine, Tampa; Ed Touchton, Avon Park; Jack Russell, Clearwater; Dan Hall, Clearwater; George Phelps, Haines City; Joe Bill Rood, Bradenton; E. Austin Jones, Bill Wodtke, Jr., and Lean “Pappy” Sike. It was men like these, who out of love for a game, a bond, a commitment to it and each other, that made the association flourish.

During those early years the association’s history is a little sketchy. However, we do know that the association was governed by a Board of Directors, a President elected from the Board and numerous volunteers; basically as we are structured today. Presently there are twenty-two fulltime employees handling the association’s daily activity, unlike in A.C. Ulmer’s day when all members were volunteers. As the story was told to me, the first employee was a man by the name of Jimmy Lee who actually volunteered his time while running the office for the association. Then President Ronny Brugh advanced payment to Lee for incidentals and other office expenses but Jimmy did not receive a salary.

As the years go on our commitment continues, not only for great champions and leaders, but for championships.

A.C. Ulmer, his friends and those who followed were very satisfied with their annual event. However, as the popularity of amateur golf grew, the association saw a need to add new tournaments to its schedule. From the opening Amateur in 1914 to the more than 600 event days presently conducted by the FSGA, they have all followed the tradition. The FSGA currently conducts 46 state championships, 51 USGA qualifiers, and 54 state qualifiers to go along with a One-Day circuit unparalleled by any state association in the country.

As the tournament schedule grew from one to many, so did the need for additional full-time and volunteer help. The task was becoming too large for so few to handle. Recognizing this, the association approached Bill Carey, then volunteer, to hold the helm of the Florida State ship. Bill agreed to devote as much time to the association as he could while running his advertising agency in Sarasota. Thus, the Florida State Golf Association moved to Main Street, Sarasota. Bill Carey captained the FSGA for 25 years while managing to grow his own business in 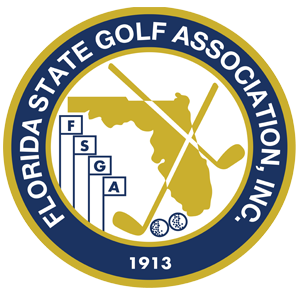 to a profitable enterprise. Bill retired with honors and the tradition continues. Cal Korf took the helm in January 1982.

Much has happened to us as individuals, to Florida and to the game of amateur golf during these passing years. We have seen the comings and goings of some great people, some innovative and not so innovative ideas, some great tournaments, some philosophies and some unusual events, all which helped form the history of the Florida State Golf Association. As things come and go, the tradition continues as long as the love for the game lives in the hearts of our members.

The Florida State Golf Association is a statewide organization governed by active Board members, Executive Committee members, full-time employees and numerous volunteers who participate at special events. Presently we number about 850 active clubs and 287,000 members. Some opportunities offered to members are: championship competition, mailings of schedules and events, handicap system, course ratings, rules seminars and many more.