Did your ball hit mine...now what do we do?

It often happens and the Rules of Golf cover what to do when a ball at rest and in play is moved by another ball in motion after a stroke.

The answer is found in two different Rules (Rules 18 & 19). First, you need to get the facts to make sure you find the right answer.

In stroke play only, if both balls lay on the putting green prior to the stroke, the player making the stroke incurs a penalty of two strokes (Rule 19-5a). The moved ball must be replaced (Rule 18-5) and the striking ball is played from where it came to rest. In match play there is no penalty. In order to avoid a penalty, a player may ask another player to mark the position and lift his ball on the putting green before making his stroke (Rule 22). 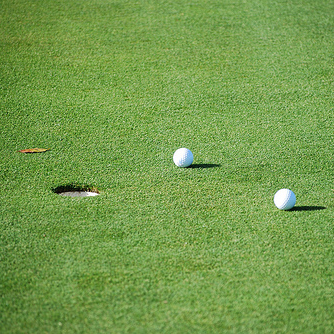 If the ball in motion after the stroke was played from other than on the putting green, there is no penalty to either player in either form of play. Once again the moved ball must be replaced and the striking ball is played from where it came to rest.

What happens if both balls were in motion as a result of a stroke and they collide? The answer is there is no penalty to either player and they both must play their ball as it lies; with one exception and this one gets a little tricky.

If a player makes a stroke while the other ball was in motion as a result of a stroke from the putting green, the player incurs a loss of hole penalty in match play or two strokes in stroke play unless it was his turn to play (Rule 16-1f). Simply put, if it was the player’s turn to play (he was away), he gets no penalty. If he plays out of turn (the other player was away), he incurs the penalty regardless if his ball strikes another ball in motion or not.

That makes sense. If your opponent or fellow competitor has a putt rolling and it looks like it may go in the hole and then along comes your ball and knocks it off line because you didn’t wait until it was your turn to play, then you deserve a penalty!

One tip; you can never get a penalty if you putt first.

Remember, it pays to know the Rules.  Knowing the Rules of Golf can help you save strokes and enjoy the game of golf.