Lost Ball; Is it Always a Bad Thing?

Not necessarily. There are times when your ball is lost and there is no penalty at all. For instance, it may be lost in an abnormal ground condition such as a puddle of casual water or a ground hog hole. It may also be lost in an obstruction such as a garbage can or the maintenance building and still you get out of jail free!

One of five things has to happen for a ball to be lost; focus on the fourth instance for this article. 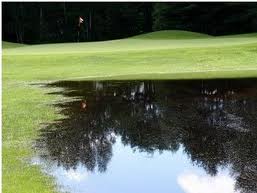 The answer comes from the definition of Lost Ball. Let’s take a look.

A ball is deemed lost if:

a.       It is not found or identified as his by the player within five minutes after the player’s side or his or their caddies have begun to search for it; or

b.      The player has made a stroke at a provisional ball from the place where the original ball is likely to be or from a point nearer the hole than that place (see Rule  27-2b); or

e.       The player has made a stroke at a substituted ball.

Back to the story. If the fourth item above fits the bill for the reason your ball is lost, you incur no penalty and don’t have to worry about the distance in “stroke and distance”. Instead, Rules 24-3 and 25-1c allow you to proceed without penalty.

First, we need to establish a reference point to apply the Rule. That will be the spot where the ball last crossed the outermost limits of the condition. If it flew into a garbage can, find the spot where it last crossed the edge of the garbage can. Ignore vertical distance for the time being and look straight down to the ground under that spot and that will be your reference point for the purpose of applying this Rule.

If it is lost in an abnormal ground condition or an immovable obstruction, find that same reference point of where the ball last crossed the outermost limit of the condition. Ignore vertical distance again, and then drop a ball, no nearer the hole, within one club-length of the reference spot.

Remember, use the definitions, index or the table of contents to find the correct Rule that applies to the situation and follow the Rules of Golf to help yourself to enjoy the game of golf.