What's the proper way to mark the position of your ball?

First of all, you only need to mark the position of a golf ball in play when you are going to have to put it back.

For instance, the ball will be replaced after it has been lifted from the putting green so it will need to be marked. In contrast, if you are lifting your ball from a cart path or puddle of casual water to take you relief, you need not mark its position since you will not be putting it back. 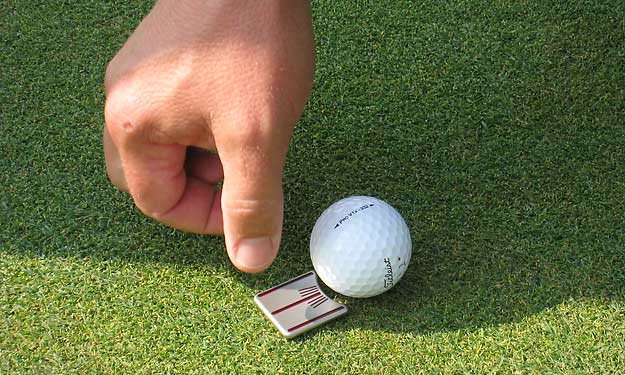 So now that we know when to mark the position of a golf ball, how do we do it?

The Note at the end of Rule 20-1 gives us a “best practice” on how to accomplish this rather mundane feat. The text reads “The position of a ball to be lifted should be marked by placing a ball-marker, a small coin or other similar object immediately behind the ball.”

of, or behind the ball marker, depending on how you originally marked it. Additional methods include using your foot, a poker chip, a small amount of powder, and even a coin with the last two digits of its mint year as your target score for the day!

Some examples of marking the position of the ball that are still legal but are not recommended include placing the toe of a club at the side of a ball, using a tee to mark the ball or even scratching a line on the putting green (extremely discouraged).