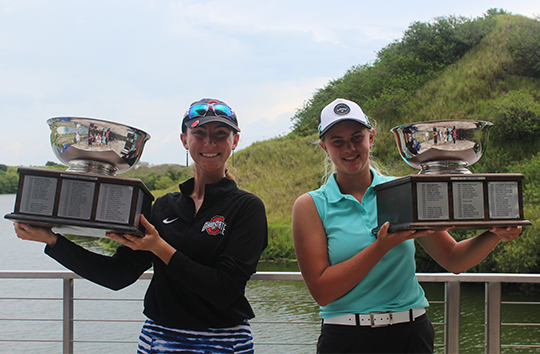 STREAMSONG, Fla. – Streamsong proved to be a tough test, but it was Jillian Bourdage and Kaitlyn Schroeder who came out on top on Sunday at the 60th Girls’ Junior Amateur Championship. Bourdage captured the 16-18 Division, while Schroeder was victorious in the 13-15 Division.

Bourdage secured her first Florida State Golf Association Championship victory with a 2-over 218. Beginning the day in third place, she started the day with two birdies on the first four holes. She continued her strong play, adding another birdie and playing the front nine at bogey-free. The Tamarac native moved into a tie for first place with par on the ninth hole.

With a birdie on the 11th, Bourdage pulled into the top spot on the leaderboard, a position she held for the remainder of the round. She carded pars over the next five holes to head to the 18th with a three-shot lead.

After a 30-minute weather delay, Bourdage two-putted for birdie on the final hole to secure the victory and post a final-round 5-under 67, the low round of the championship.

Mayumi Umezu took home a runner-up finish, posting a 5-over 221. She finished the final round with a 1-under 71, carding four birdies, including one on the final hole. Andie Smith and Juliana Camargo tied for third place at 7-over 223.

Schroeder went wire-to-wire at Streamsong to earn the 13-15 Division victory with a 1-over 217. She started the day with a five-shot lead and played a solid front, recording a bogey-free nine with two birdies. The Jacksonville native ran into some trouble on the back nine, but secured the win with a par on the 18th hole.

This is the first FSGA Championship title for Schroeder, who has already picked up two Florida Junior Tour victories this season.

Karoline Tuttle made a run at the title with a 2-under 70 in the final round, but finished one stroke back of Schroeder. Tuttle posted a bogey-free front nine with birdies on the first and ninth holes. She added three more birdies on the back, including one on the final hole of the championship.

Mi Li and Tori Mouton tied for third place at 7-over 223. 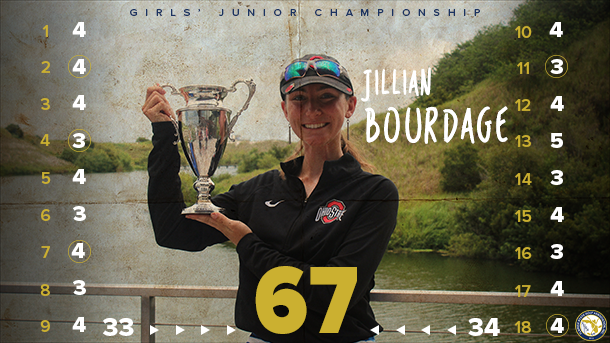 The junior schedule will continue next week with the Boys’ Junior Amateur Championship on July 5 - 7 at Streamsong Resort in Streamsong, Florida.