Estrada and Zeng Prevail at Banyan 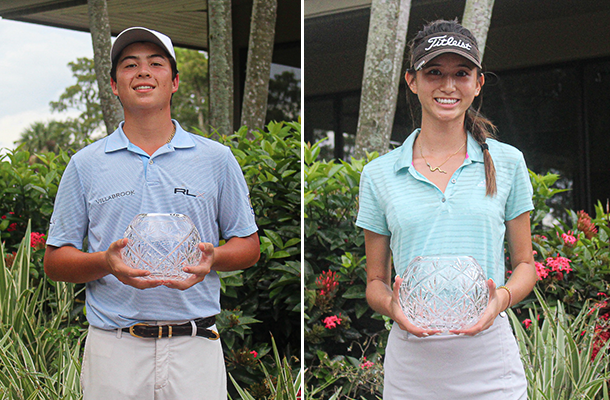 WEST PALM BEACH, Fla. -  The players were not only challenged by Banyan Golf Club of Palm Beach, but several suspensions of play due to weather.

Day one concluded with a final suspension due to darkness and those players who did not finish round one returned at 7:30 a.m.on Sunday prior to starting round two. Nicholas Estrada and Taylor Zeng prevailed to claim first-place wins.

An impressive round of five birdies and all pars secured the early lead for Nicholas Estrada, of Lake Worth. Estrada turned at three under-par and finished round one with two birdies on holes 17 and 18 to post a 67 (-5). Avery Hurst, of Sebring, played strong posting five birdies and two bogies to finish two strokes back with a 69 in round one. Sebastian Nachilly, of Jupiter, and Pablo Quintero, of Miami, tied for third place at two under-par 70.

Estrada outlasted a weather suspension in round two to secure a wire-to-wire victory by one stroke. Due to three bogies and one birdie in round two, Estrada posted a 74 and three under-par 141 total to win his first FJT. Bryce Walker, of Bartow, played strong in both round one and two to finish in second place at two under-par 142. Walker posted five birdies in round one to finish at even par and eagled the par five 10th hole in round two to post a 70. Two identical scores of 71-72 for a one under-par 143 total, allowed Austin Cherichella and Campbell Kennedy to tie for third.

Five under-par, posted by Taylor Zeng, led the top of the leaderboard in the girls’ division! Zeng, of Orlando, turned at two under-par and used her momentum to post four birdies on the back nine for a 67 in round one. Andie Smith, of Hobe Sound, posted an eagle on the par five 10th hole and two birdies to finish day one five strokes back at even par.

Three birdies and three bogies in Zeng’s final round secured her first place victory at five under-par 139. Zeng earned her second FJT win after prevailing at Rio Pinar Golf Club in May. Despite carding four birdies in a row on holes eight through 11, Smith finished in second place with a final round 76 and 148 total. Zoey Iglesias, of Port Saint Lucie, scored three strokes lower in round two to round out the top three at five over-par 149.