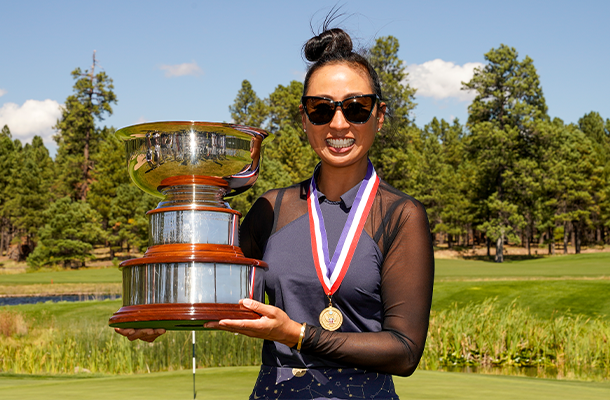 TAMPA, Fla. – Ina Kim-Schaad, who captured the 2019 U.S. Women’s Mid-Amateur Championship and Women’s International Four-Ball title, has been chosen by the FSGA as its recipient of the President’s Award.

This is just the third time in FSGA history that the President’s Award has been awarded to a player. The honor is awarded to a player who has had a standout season or won a national championship, but who is not eligible to be named a Player of the Year because of residency or membership requirements.

Kim-Schaad started her 2019 season with a win at the 72nd Women’s International Four-Ball Championship alongside her partner and fellow U.S. Women’s Mid-Amateur Champion, Meghan Stasi.

Kim-Schaad claimed her first national championship victory in September at the 33rd U.S. Women’s Mid-Amateur Championship. On her way to the finals, Kim-Schaad defeated the 2016 Champion, Shannon Johnson, and four-time Champion, Stasi. She took an early lead during the 18-hole final, winning two of the first three holes and clinched the win with a 12-foot birdie on the 16th hole. Her victory also earns her an exemption in the 2020 U.S. Women’s Open.

The Rhinebeck, N.Y. resident raised the trophy at the U.S. Women’s Mid-Amateur just three years after a hiatus from golf of more than a decade. Kim-Schaad was a standout player in high school in the late 1990’s when she advanced to the quarterfinals of the 1998 U.S. Girls' Junior and was a finalist in 2000. The Los Angeles native played collegiately at Northwestern University but then decided on a career in business rather than the LPGA.

Kim-Schaad is a standout player in the world of Women’s Amateur golf, and the Florida State Golf Association would like to congratulate her on an outstanding season and USGA Championship win.