Three teams end 2019 with a victory in their respective division at the Men’s Net Four-Ball, hosted by Southern Dunes Golf & Country Club. 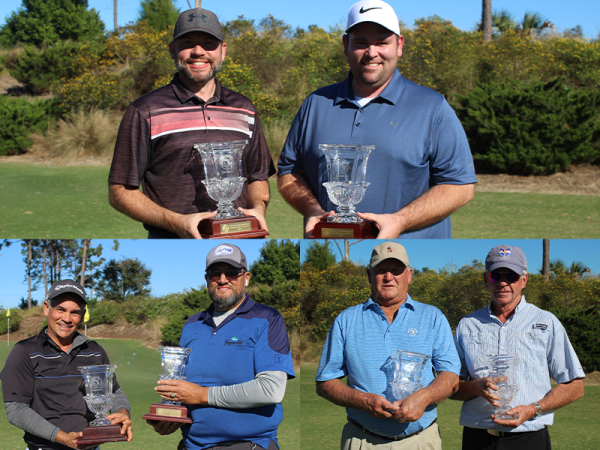 A rain storm delayed the start of round one, but both rounds finished with sunny skies and great golfing weather. Two teams, Mike See/Michael Ulsh and William Gariepy/Jim Jensen, tied at the top after the final round with an impressive 12 under-par 132. See, of Palm Harbor, and Ulsh, of Tampa, started Sunday’s round six strokes back after a first round 67. Round two was highlighted by seven net birdies and a net eagle, from See/Ulsh, to post a 65 and climb up the learderboard. The team from Brooksville, Gariepy and Jensen, posted two net eagles in round one to lead by four strokes. The duo finished round two with a 71 to tie See and Ulsh at the top. A modified USGA score card playoff was used to crown See and Ulsh Champions due to their lower final 18 hole score. Four teams tied for third place with a final ten under-par 134; Jimenez/Stone, Rolfs/Wooley, Vassallo/Vassallo, and Mealey/Young.

An exciting finish for Edwin Torres, of Bartow, and Carlos Lamarche, of Orlando, crowned the duo victorious. A four-way tie at the top concluded the final round with the teams of Lamarche/Torres, Briggs/Johnson, Daugherty/Rosenberger, and Hogan/Kelly finishing at 13 under-par 131. Despite starting round two five strokes back, Torres and Lamarche fought back with eight net birdies and a net eagle. Finishing with a nine under-par 63, Lamarche/Torres  broke the tie at the top and seized victory!

John Zuehlke, of Hernando, and James Sparks, of Spring Hill, dominated round one with three net eagles  to finish in the lead with a 12 under-par 60. The team from Winter Haven, Kevin Hyman and  David Norka, was a force to be reckoned with in round two. Hyman posted back-to-back net eagles on holes 16 and 17 while Norka had a net eagle on the 10th hole to finish in first place. Hyman and Norka finished with rounds of 65-63 to claim the win at 16 under-par 128. John Thompson and Bruce Moskovciak played steady rounds of 63-66 to finish one stroke back in second place. In third place finished John Christensen and Dwaine Zitko, with an impressive first round of 62, and 14 under-par 130 total.