The 61st Girls’ Junior Championship got underway on Tuesday in Bradenton 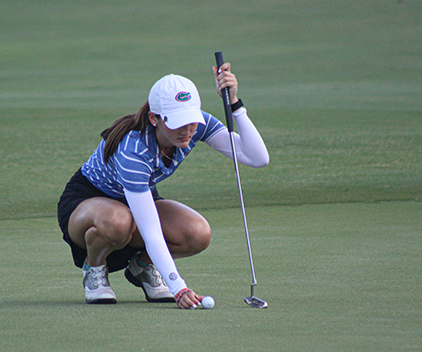 Players battled high temperatures in the first round of the 61st Girls’ Junior Amateur Championship in Bradenton. Maisie Filler holds the lead in the 16-18 Division, while Bridget Ma and Jordan Fischer share the lead in the 13-15 Division.

An incoming University of Florida freshman, Filler fired a 4-under 67 in the first round at Bradenton Country Club. Ma and Fisher, who were playing at River Strand Golf & Country Club, each carded a 4-under 68.

Filler, who began her day on the back nine, started the day with a bogey on the 10th hole, but rebounded with three-straight pars. The Palm Beach Gardens made the turn at 3-under, after birding four of the final five holes on her first nine.

“I didn't start off great, I bogeyed the first hole. I think I was kind of nervous for the first couple holes,” Filler said. “Then I got my groove going and committed to every shot and all my putts. It worked out.”

She added another first on the first to move to 4-under. Filler holds a two-shot lead over the field heading into the second round.

Ma played a solid front nine, posting three birdies and one bogey, to make the turn at 2-under. The Windermere native birdied two of three holes to start the back nine. She finished the day birdie-bogey to record a first-round 68.

After starting the day at even-par, Fischer birdied four of five holes at the turn to move to 4-under. The North Fort Myers native finished the day with seven-straight pars to hold a share of the lead after the first round.

Last year’s champions have their eye on another title. Jillian Bourdage, the 16-18 champion, posted a 2-under 69 in the first round and sits in a tie for second with Ellen Dong. The 13-15 champion, Kaitlyn Schroeder carded an even-par 72 on Tuesday to head into the second round in a tie for third place with Izzy Pellot.

A total of five players posted under-par rounds in the first round.

The field will be cut to low 70 players and ties after Wednesday’s round.

“Every time I go into a tournament, I try to have no expectations and go out and enjoy the round. Coming into today, I wasn't sure what to expect. I just wanted to give it my best and hopefully put up a good number and give it my best shot.” ­­– Bourdage on battling the heat this week

“I made a couple small mistakes on the par-5s. If I can clean that up, I should play pretty good the rest of the week.” Schroeder on her play in the first round

“We’re playing a different golf course in the second round, so you kind of have to alter your mindset a bit. I think it’s more target golf tomorrow at River Strand. Just keeping it the same and hopefully, keep it going.” Filler on heading into the second round

A Look at the Leaderboard