Deacon Chomps His Way to Another Title 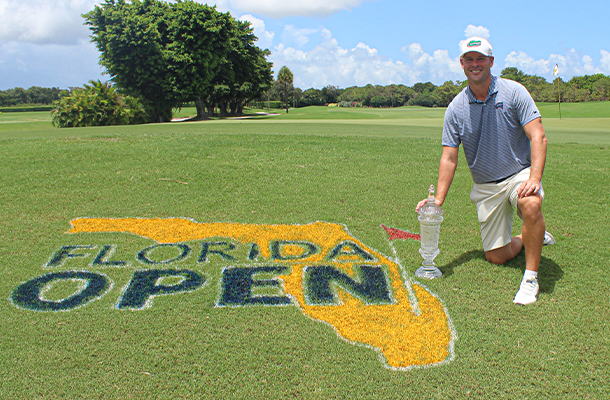 BOYNTON BEACH, Fla. – On Sunday, JC Deacon did something that only nine other people in FSGA history had done: raise the Florida Open trophy for the second time. Deacon was crowned the 74th Florida Open champion on Sunday at Pine Tree Golf Club. He posted a final-round 2-under 69 to capture the championship at 12-under 202.

“It means a lot,” Deacon said. “I’ve had three or four months to really prepare for this. I wanted to be a good model for my guys. I worked my butt off to be ready for this tournament. The first two days were really, really solid and I think I was a good example for those boys.”

Beginning the day with a two-shot lead over the field, Deacon started the day with four-straight pars, before carding his first bogey of the championship on the fifth.

The University of Florida men’s golf coach made a clutch par save on the seventh hole from the penalty area to stay tied for the lead at 9-under with Kenny Goodykoontz. Deacon birdied the ninth hole to take the solo lead and make the turn at even-par for the day.

He had a strong start to the back nine, birding two of the three first holes to take a three-shot lead over the field. Deacon finished the day with a birdie on the 18th to secure a final-round 69 and the victory.

“The birdie on 12 made me feel really comfortable and confident,” Deacon said. “It was by no means done at that point, but it gave me a little bit of breathing room with the field.”

The Toronto native was the only player in the field to shoot three rounds in the 60s (68-65-69). Deacon, who also won the 2017 Florida Open, becomes the 10th player to capture two Florida Open victories.

Ryan Orr, Dillon Board and Goodykoontz took home a share of second place at 8-under 206. Orr, a University of Florida graduate, spent the final round trying to chase down his former coach. The Belleair native used his best round of the championship, a bogey-free 67, to finish with a runner-up finish.

Board also used a final-round 67 to finish the championship in a tie-for-second place. After a bogey on the sixth, the Jacksonville native played the rest of the day bogey-free, carding three birdies on the back nine.

Alfredo Adrian made the most of the final round, posting the low round of the day to jump 19 spots up the leaderboard. The Doral resident carded five birdies on the front nine, before finishing the day with a bogey-free back nine to shot a final-round 65 and take home a fifth-place finish.

Devon Hopkins secured Low-Amateur honors, finishing the weekend in a tie for ninth place at 3-under 211.