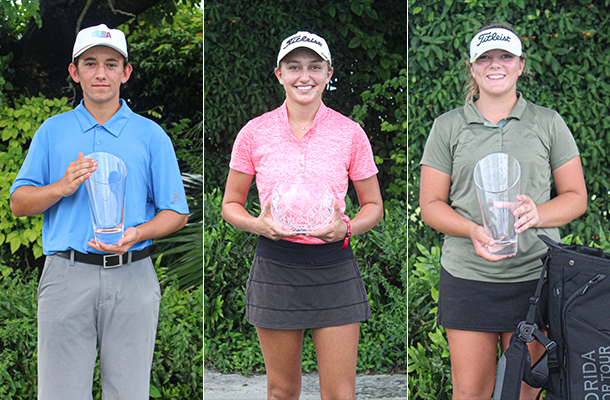 BOYNTON BEACH, Fla. – After facing multiple weather delays in the final round, three Florida Junior Tour Major winners were crowned on Wednesday at Indian Spring Country Club. Nicholas Prieto picked up the win in the Boys 13-15 Division, while Kyrsten Shawah and Ryleigh Knaub were victorious in the Girls 16-18 and 13-15 Division, respectively.

Prieto earned the three-shot victory on Wednesday with a 3-under 213 for the three-day tournament. He held a four-shot lead heading into the final round, after two under-par rounds (71-70) to begin the tournament.

The Miami native got off to a hot start in the final round, birding three-straight holes to make the turn with a bogey-free 33. Despite running into some trouble on the back, a bogey on the 15th and a double bogey on the final hole, Prieto held on to take home the win. He captured his second FJT win of the season with a final-round 72, as he was the only player in the field to post three even-par or better rounds.

Shawn Coultoff finished runner up at 2-under 214, carding a final-round 69. The Winter Garden native began the final round with a bogey-free front nine with three birdies. He finished the day with an even-par back nine to post the low round of the day.

Carson Baez took home a third-place finish at 1-over 217, while Chase Carroll finished fourth at 3-over 220.

Shawah secured her first FJT victory on Wednesday with a 2-under 214 for the tournament. After the second-round leader, Bridget Ma, withdrew due to injury, Shawah began the final round with a two-shot lead over the field.

The Boca Raton native got off to a hot start with a 4-under front nine. She aced the par-313th hole, while also adding three birdies to move to 3-under for the tournament. Shawah finished the day with a 1-over back nine to record a final-round 69, the low round of the day.

Juliana Camargo took home a second-place finish at 2-over 218. She shot a final-round 71, her low round of the tournament. Amelie Alcantara finished third at 3-over 219, while Angelica Holman shot a 5-over 221 to finish fourth.

Knaub used 2-under 70 in the final round to clinch the 11-shot victory in the 13-15 Division at Indian Spring. After Tuesday's round, Knaub held a two-shot lead over the field heading into the final round, after beginning the week with 75-73.

The Winter Springs native started the day with a 1-over front nine to move to 3-over for the week. Knaub carded a bogey-free back nine, adding three birdies to post the only under-par round (2-under 70) of the week in the 13-15 Division. She captured her third FJT win with a 2-over 218 for the three-day tournament.

Nicole Yugay took home a second-place finish at 13-over 229, carding a final-round 77. Alexandra Gazzoli finished one shot back of Yugay in third place at 14-over 230.