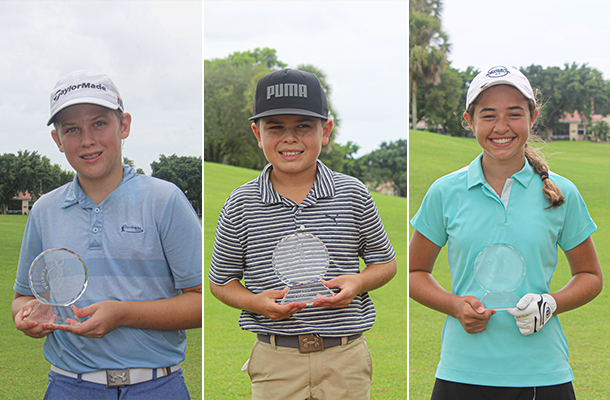 LAKE WORTH, Fla. – After weather cancelled the first round, Jessy Huebner, Jude Desmond and Valentina Marie Guertin were victorious on Sunday at Fountains Country Club as the tournament was shortened to 18 holes.

Huebner was victorious in the Boys 11-12 Division, Desmond won in the Boys 9-10 Division and Guertin took home the win in the Girls 11-12 Division. This is the eighth FJT win for Huebner, the second for Desmond and the first FJT victory for Guertin,

Huebner earned his second FJT win of the year with a 2-under 70 in Sunday’s round. The Port Saint Lucie native got off to a quick start with a birdie on the first and made the turn at even par. Huebner put together a solid back side with three birdies, including back-to-back birdies to close out the round. He captured the five-stroke victory with the only under-par round in the field.

Andrew Tsar and Hampton Beebe finished tied for second at 3-over 74, while Ryan Nana Tanke finished fourth at 5-over 77.

Desmond picked up his first FJT win since March with a 1-over 73 at Fountains CC. After a double bogey on the second hole, Desmond turned it around with a birdie on the fourth, before making the turn at 2 over. The Pompano Beach native carded a bogey-free back nine and clinched the two-shot win with a birdie on the 17th.

Cooper Foegen took home a runner-up finish at 3-over 75 and Michael Jorski finished third at 4-over 76.

Guertin used a 1-over 73 to earn the big win in the Girls 11-12 Division, finishing the tournament nine-shots ahead of the field. After beginning the day with a bogey on the first, the Boynton Beach native birdied the fourth and posted a 2 over on the front side. She birdied two of her final four holes to finish the day at the top of the leader board.

Angela Jiang finished second at 10-over 82 and Fernanda Carrion finished third at 14-over 86.