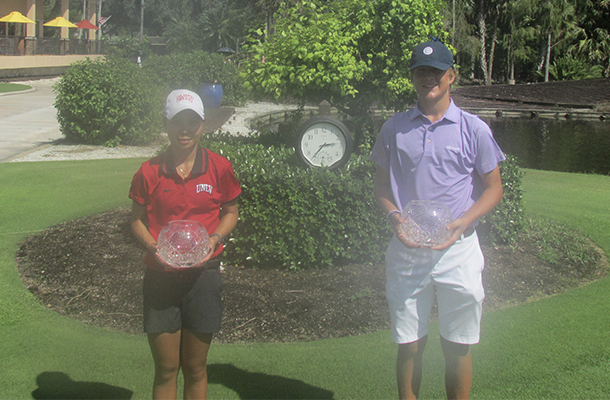 This is the second FJT win at Eagle Creek for Smith in the last two months, after he captured a win there in August. With this victory, Matsui becomes a first-time FJT winner.

Smith secured the four-shot win at Eagle Creek with a 4-under 140 for the tournament. He began the tournament with an even-par 72 in the first round, birdieing two of his final three holes of the day to head into the final round one shot back of the leader.

The Windermere native got off to a hot start in the final round with birdies on two of his first four holes of the day. He added another on the seventh and made the turn at 2 under for the day.

Smith continued his strong play on the back side with a birdie on the 10th and back-to-back birdies on the 13th and 14th. He finished the day with a 4-under 68, the low round of the tournament, to secure the win.

Jiaming Liu, Gabriel Hegerstrom and Connor DeMichele tied for second at even-par 144, while Connor Holcroft finished at 1-over 145 in the fifth place.

Matsui went wire-to-wire to earn her first FJT victory at 1-over 145. She began the weekend with a 2-under 70 in the first round to take a two-shot lead over the field. Her first-round 70 was the only under-par round in the Girls Division for the weekend.

The Port Saint Lucie native ran into some trouble to start the final round, bogeying the first two holes. She quickly rebounded with back-to-back birdies and made the turn at 1 over for the day. Matsui finished the day with a 2-over back nine to post a final-round 75 and secure win.

Alexis Rieli finished one shot back of Matsui in second place at 2-over 146. The Apopka native used a final-round 72 to earn a runner-up finish. Sophia Louis took third place at 3-over 147, while Jordan Fischer and Darianys Guzman tied for fourth at 4-over 148.