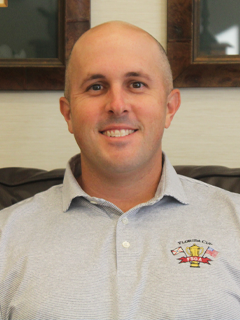 “I am honored and humbled for the opportunity to serve as the next Executive Director of the Florida State Golf Association,” Magaditsch said. “I have been fortunate to have some unbelievable mentors during my time with the FSGA and I am excited to start this next chapter in my life.”

Magaditsch succeeds Jim Demick, who will be retiring after 24 years with the FSGA. A native Floridian, Demick joined the FSGA as the Executive Director in 1997. During his tenure, the organization grew into the largest and most active golf association in the country.

Demick will remain a part of the FSGA family, serving as an adviser to the Association and as President of the FSGA Foundation.

"It has been the honor of a lifetime to be part of the FSGA,” Demick said. “I've been fortunate to work with incredible members of our staff and hundreds of wonderful volunteers. It's also been great to watch our junior golfers grow up and become successful on and off the golf course. I look forward to watching the FSGA's continued success and Jeff and the team will do a fantastic job."

Magaditsch, 38, joined the FSGA in July 2007 as a Tournament Director. He was promoted to the Director of Tournament Operations in 2017 and served in that capacity until his promotion to Assistant Executive Director in 2019.

Born and raised in Florida, golf became a part of Magaditsch’s life when he was 14 years old, as he watched Tiger Woods emerge on the scene. He has worked in the golf business since he was 15 years old and been involved with the FSGA since he was a teenager.

He graduated from the University of South Florida with a Business Administration degree in Marketing. Magaditsch and his wife, Jasmine, have two sons.

The election of Officers and the Board of Directors occurred on November 19 during the Association’s Annual Meeting via a virtual conference call.

During this unprecedented year, the FSGA conducted over 450 days of competitions and continued services to its member clubs around the state and the golfers of Florida.

The FSGA is a non-profit organization formed in 1913 to promote, protect and preserve the game of golf.