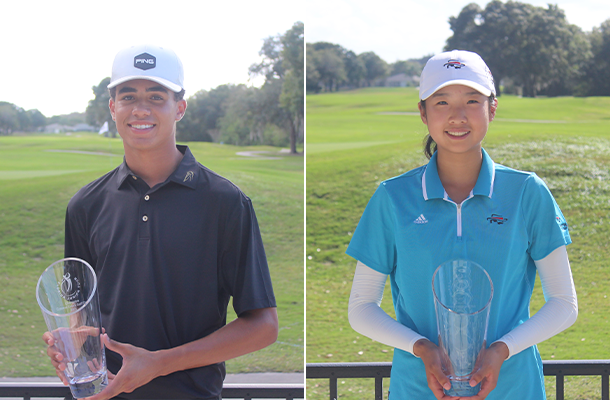 Brown went wire-to-wire to end his season with a victory, finishing the weekend at 1-under 143. He got the tournament started with a 1-under 71 in Saturday’s first round to take a one-shot lead over the field.

The Lakewood Ranch native began the final round with an even-par front side, carding two birdies. After a bogey on the 11th, Brown played the next six holes at even par. He rolled in a birdie on the 18th to secure the one-shot win. His two-day total of 1-under 143 was the only under-par round of the weekend.

Wu took home a three-shot victory with a final-round 74, finishing the weekend at 11-over 155. She began the weekend with a first-round 81, carding an eagle on the par-5 18th hole.

Beginning the final round trailing the leader by four shots, Wu got off to a solid start with an even-par first nine. The Davenport native finished the day with a 2-over final nine to secure the win with a 2-over 74 on Sunday.

Darby Hancock took second place with a 14-over 158 for the weekend. Three players finished the weekend in a tie for third at 15-over 159: Jamie Lowry, Kierra Williams and Sydney Young.