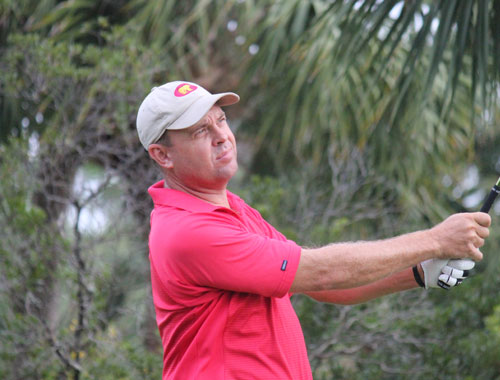 Stephen Anderson, of Hobe Sound, earned the 26th seed after posting rounds of 79-72—151 in stroke play qualifying to advance to match play. In the first round, Anderson defeated Jeronimo Esteve, of Windermere, 4 and 3 in the round of 32, and then bested Rokki Rogan, of Fort Myers, 1 up, in the round of 16. Anderson then defeated the second seed, Joseph Latowski, of Port Saint Lucie, 1 up to advance to the semifinals.  Anderson then ousted Gary Nicklaus, from Jupiter, in the semifinals 2 and 1 to secure his spot in the finals versus Joe Alfieri.

The final match went back and forth on the front nine as Anderson was 1 up through the first two holes until Alfieri won the 3rd hole to square the match. Anderson regained the lead after winning the fifth and sixth hole, with Alfieri winning the seventh hole to go one down heading into the back nine.  Anderson took control on the back nine by winning 10, 12, 13 and 14 to beat Alfieri 5 and 4.  Anderson is the first person in 30 years to go back-to-back at the Mid-Amateur Championship.

Joe Alfieri, of Lutz, went into match play as the number one seed.  Alfieri, the 1999 Mid-Amateur Champion defeated Ross Beal, of Orlando, 5 and 4 in the round of 32, and then bested  Dean Stokes, of Palm Beach Gardens, 2 and 1, in the round of 16. Alfieri then defeated Darin Green, of Brandon, 3 and 2 to advance to the semifinals, where he defeated Thad Hudgens, of Longwood, 6 and 4.

To be eligible for the State Mid-Amateur, participants must be 25 years of age or older as of October 6, 2011. Players attempted to qualify at one of nine sites in 18-holes of stroke play. The Championship consists of 36-holes of stroke play qualifying over the first two days with the lowest 32 advancing to the match play on Saturday and Sunday.