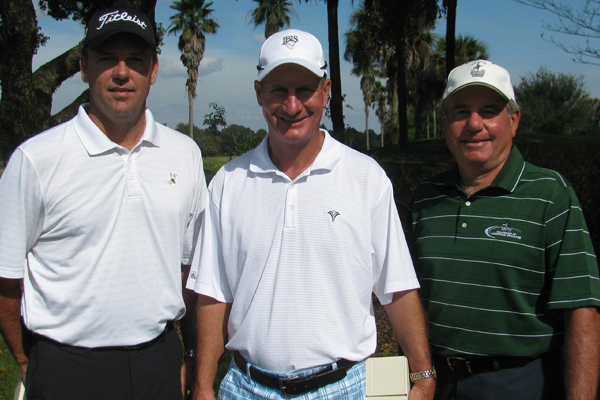 Mike Nealy captured the Winter Series event run by the Florida State Golf Association at Lake Wales Country Club in Lake Wales, January 9-10. He was joined in the winner’s circle by Tim Cox and Pat Vincelli, who won the Senior and Super Senior divisions respectively.

Mike Nealy, of Boca Raton, prevailed in a playoff to win the 40-54 Division. After rounds of 70-73 for a tournament total of one-under par 143, Nealy found himself tied with Richard Kerper, of Saftey Harbor, after his rounds of 71-72. The two would head for a sudden death playoff, where Nealy prevailed by making a par on the first playoff hole. Jerry Rose, of Sarasota, finished alone in third place with a tournament total of even par 144.

In the Senior Division, Tim Cox, of Palm Beach Gardens, came from behind to win by four strokes.  In the first round Cox carded an even par round of 72, and finished strong in a final round of three-under par 69 to win the title. David Kartner, of Port Saint Lucie, finished alone in second place after rounds of 74-71, for a tournament total of one-over par 145. Gordon Blakeley, of Lutz, and Gil Turner, of Palm City, finished tied for third place with a tournament total of 146.

In the Super Senior Division, Pat Vincelli, of Stuart, went wire-to-wire to win by three strokes. Vincelli posted the low round of the tournament in the first round with an impressive four-under par 68, to hold a four stroke advantage heading into the final round of play. In the final round, Vincelli carded a round of one-over par 73 to capture the title.  Tom Austin, of Lake Wales, finished alone in second place after rounds of 74-70 for a tournament total of 144. W Daniell, of Tallahassee, finished in third place with a tournament total of 145.