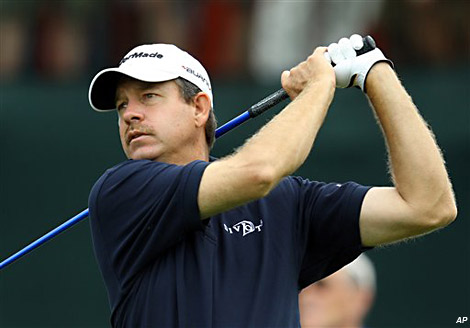 
Bart Bryant thinks his wife will deliver a son. And if the boy is like his father, he'll enter the world with a cool head, taking his slap on the behind in stride and moving on the better things.

Bryant, 25, was unflappable Sunday in the Florida Open final round at the Innisbrook Resort. He won the Open by two strokes, overcoming early trouble, solid competition and the distraction of his wife Candy sitting home in Orlando, 11 days overdue with their first child.

Starting the final round, Bryant led Henke by two strokes, and PGA Tour player John Huston by five. On the par-5 second hole, Bryant's second shot, a 4-wood, splashed into the lake. He took a bogey. Henke parred and Huston birdied the hole. "I was feeling plenty of pressure," Bryant said. "John Huston moved within three strokes and Nolan was within one. But..."

Bryant then birdied the next three holes. "It was my week," he said after finishing his fourth straight sub-par round. On the No. 4 hole, Henke watched his 40-foot birdie putt disappear into the cup. But Bryant followed with a 20-footer for birdie. "He played so strong, it never seemed there was a chance to pass him," said Henke. "I was making birdies just to keep up with him."

Huston could not keep up up with the twosome. "Missed two or three short putts early and then I three-putted No. 7," said Huston, who shot a 70 and finished tied for sixth overall. Entering the back nine, Bryant still led Henke by two. At the 11th hole, both birdied. At No. 15, both birdied. At the 435-yard par-4 No. 16, Henke birdied with a 10-foot putt. Bryant lined up his 9-foot putt for birdie and drilled it. "That really did it for me," said Bryant, who still faced a challenge on No. 18. The last hole, a 348-yard par 4 featuring a 90-degree turn, requires a straight tee shot, a cautious approach near water, and imaginative putting on a tricky green. Bryant's tee-shot, using a 2-iron went straight but into a divot. his approach landed in the rough, 40 yards short of the pin. Henke's approach kissed the green, 15 feet past the hole.

A bogey by Brant and birdie by Henke would send the tournament into sudden death. Henke didn't count on it. "He'd been playing so well," Henke said. "I figured he'd get out of it with a four." But when Bryant's chip was still 20 feet short of the hole, the playoff possibility grew stronger. Bryant planned to two-putt and put pressure on Henke. He stroked it and with little break, it crept to the hole and dropped for par, and the Open title. "I wasn't trying to make it," Bryant said. "I just hit it dead perfect. It was a fitting end because my putter carried me all week." Henke missed his now-meaningless birdie putt. He still "felt very good" about shooting a 67 under the gun of a final-round face-to-face match.

Two 67s were not what Bryant had planned on. "He (Henke) played a great round," Bryant said. "I figured I could shoot even-par and win it." If Bryant had shot even par, he would have tied Steve Lamontagne of Satellite Beach. Lamontagne shot a 65, one off the course record, to finish third at 8-under 279. Jay Overton, director of golf at Innisbrook, was the highest Tampa Bay finisher, repeating his 1987 fourth-place finish (at 280). His fellow local pro, Steve Schaff of Bloomingdale Golfers Club in Brandon, shot a 75 Sunday to move back to a tie for 18th. Tying Schaff was Clearwater's Greg Kraft, a first-round leader who knocked himself out of it was an 80 Friday. Kraft bounced back with a 71 Saturday and 68 Sunday.