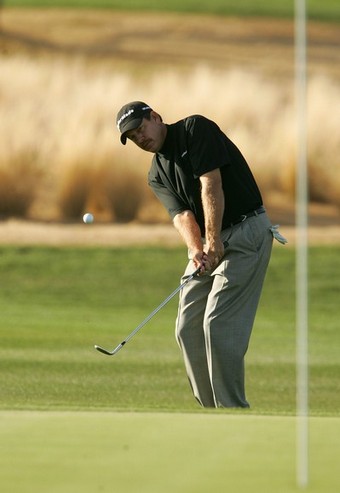 Bryant's final-round 68 gave him a 13-under-par 275, good for a two-stroke margin over Bobby Gage, who shot 66. It was Bryant's second Florida Open win; he won in 1988 at Innisbrook Resort at Tarpon Springs.

Bryant, 31, of Orlando, brother of PGA Tour pro Brad, earned $10,000 for the victory. "This neck of the woods has been pretty good to me," Bryant said. Bryant cashed the biggest check of his career, $33,500, at the 1991 Honda Classic at TPC-Eagle Trace in Coral Springs, where he finished seventh.

Bryant played on the PGA Tour in 1991 and 1992, but he lost his card after he was sidelined by rotator cuff surgery in April, 1992. He missed four months and finished over 150th on the money list. He could not qualify for a medical exemption because he hadn't been on the tour for three years.

Bryant has spent the past two years playing the Nike Tour and Florida mini-tours. With two daughters (ages 6 and 8 months), Bryant isn't sure if he wants to go for his tour card again. He must decide by Friday whether to apply for the qualifying tournament next month. "I don't know if I want to live that life again," Bryant said. "Before this year, I had been travelling full-time the last four years."

Bryant hasn't strayed far from Orlando this year, playing a few Nike Tour events and the Tommy Armour mini-tour around Orlando. He was happy he came to South Florida , $10,000 was the biggest winning check of his career. "The course was pretty tough (on Sunday)," Bryant said. "It was wet and playing long."

Bryant made just one bogey on Sunday and four all week. "I've been playing much better lately," Bryant said. "I played poorly in 1993 - it's been a big struggle." Bryant has earned roughly $50,000 this year on the mini-tours, where he has won four other times. Gage, 29, of Altamonte Springs, shot the day's best round, a bogey-free, 6-under 66. He made only two bogeys all week.

"I tried to play as well as I could, but I just wasn't good enough to catch Bart," Gage said.