Phil played a moving ball at the US Open, but could he made a better decision? 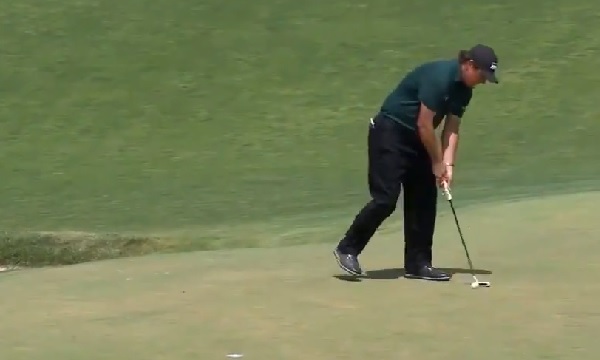 It has been a couple of weeks since the 118th U.S. Open at Shinnecock and people are still talking about the extreme conditions during the third round and the incident involving Phil Mickelson purposely hitting a moving ball. Since it is still a “hot topic” among golfers, lets discuss it.

During the third round, Shinnecock started drying out and it became very difficult to hold iron shots into greens and some putts started rolling-out more than the players expected. On the 13th hole Phil Mickelson had an 18 foot downhill putt for bogey and struck the putt too firmly. When he noticed the ball was going to roll off the front of the green and trickle down a slope behind a bunker, leaving him a very difficult shot, he decided to trot over to the moving ball and hit it back towards the hole. Granted, this act shocked most viewers, including his fellow competitor, Andrew “Beef” Johnston.

While Mickelson finished the hole, viewers and announcers speculated on what would happen to him. Many where so appalled that they were calling for him to be disqualified. After the round, Mickelson explained that he has thought of taking this action before and just “took advantage of the rule”. Eventually, the USGA announced Mickelson was penalized two strokes under Rule 14-5 (Playing a Moving Ball) and his score on the hole was a 9.

Mickelson may have thought he was taking advantage of the Rules, but actually, he was not. What Mickelson should have done was let his ball roll down the hill and come to rest. Then he could have declared the ball unplayable, taken a one-stroke penalty, and placed the ball back on the green and try that 18 foot putt again. Instead, Mickelson had to count the stroke at the moving ball and add two additional penalty strokes when he could have easily hit the 18 foot putt again and either made it, or left himself with a tap in which would saved him at least one or two strokes on the hole.

Rule 28-Unplayable Ball states that “the player may deem his ball unplayable anywhere on the course except in a water hazard” and one of the three options under an unplayable ball is “stroke and distance” (taking a one-stroke penalty and replaying from the point of the last stroke).