Four players were crowned Champions at the FJT 54-Hole Major over Memorial Day Weekend, May 25-27. 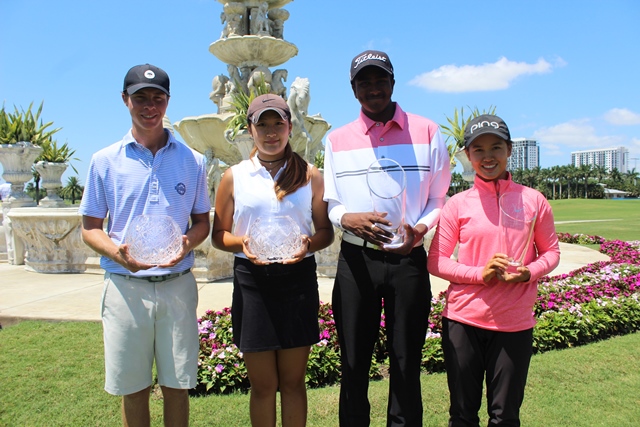 The Florida Junior Tour 54-Hole Major was played at the prestigious Trump National Doral. The players battled through windy conditions to post impressive rounds and earn great victories. The Boys 13-15 and Girls 13-18 divisions conquered the Red Course while the Boys 16-18 division played the first two rounds on the Golden Palm Course and the final round on the Blue Monster.

The Boys 16-18 division was seized by first time FJT winner Drew Angelo, of Bradenton. Angelo stole the early lead with seven birdies and a four under-par first round of 67. Adding to his lead in round two, Drew finished with a 70 to sit on top of the leaderboard by five strokes over Griffin Steutel. Steutel was the only other player under-par after the first round with a 70. After a second round of 72, Stueutel was at even par entering the final round. Angelo kept his eye on the lead in the final round where he carded three birdies to finish with a 76. Two under-par rounds secured the win for Angelo at one under-par 213! Falling to a final round 81, Steutel tied for seventh place with Jack Tharrington. Steady play from Joshua Perna, of Sarasota, propelled him to a second place finish at 219 (+5). Nicholas Gabrelcik and Scotty Kennon tied for third place, seven strokes back, at 220 (+6).

A second FJT (16-18) win was accomplished by Doral native, Skylee Shin, by one stroke with a three-day total of 227 (+11). Shin was leading by one stroke, over Kayla Holden, heading into the final round after two consistent rounds of 77. It was a back and forth final round with Holden, of Coral Springs, chasing Shin for the win. Holden started the third round with two birdies in the first three holes while Shin scored two bogies. Holden remained steady throughout the remainder of the round, but with three birdies on holes five, six, and eight, Shin held onto the lead. Despite Both Holden and Shin scoring a final round 73, Shin’s early lead allowed her to come out on top of the leaderboard. Shin added a second FJT victory of the year to her resume while Holden finished in second place at 228 (+12). Ashleigh Angelo, of Bradenton, had her best finish of the year in third place with rounds of 76-78-77 for a 231 (+15) total.

Shawn Lalmoni, of Orlando, won his fourth consecutive FJT (13-15) event in a row by three strokes. Lalmoni took the early lead with an even par first round and never lost sight of first place for his wire-to-wire victory.  In round two, Shawn carded four birdies en route to a 73 and a total of nine birdies over the three days. A final round 75 secured the win for Lalmoni with a 220 (+4) total. Brett White, of Plantation, and Reggie Zhu, of Winter Garden, tied for second place, three strokes back at 223 (+7). White scored an impressive final round of 68, 10 strokes less than day two, to climb to second place. Guoao (Leo) Xu posted the tournament low round of 67 in his final round due to eight birdies on the day.

Caiyi (Flora) Zhang, of Bradenton, had a near flawless final round to secure her first FJT (13-15) victory by eight strokes. Zhang was tied with Amelie Alcantara, of Plantation, at the start of the final round. Alcantara struggled during the third round making the turn at four over-par while Zhang turned at one under-par. Zhang posted one bogey on the final nine holes to finish with an even par round and 228 (+12) victory. Amelie claimed third place at 237 (+21) and Amelia Novoa finished in second with a come-back third round of 76 for a 236 (+20) total.

Follow the FJT:
Check out the TrackMan Combine schedule by clicking here!