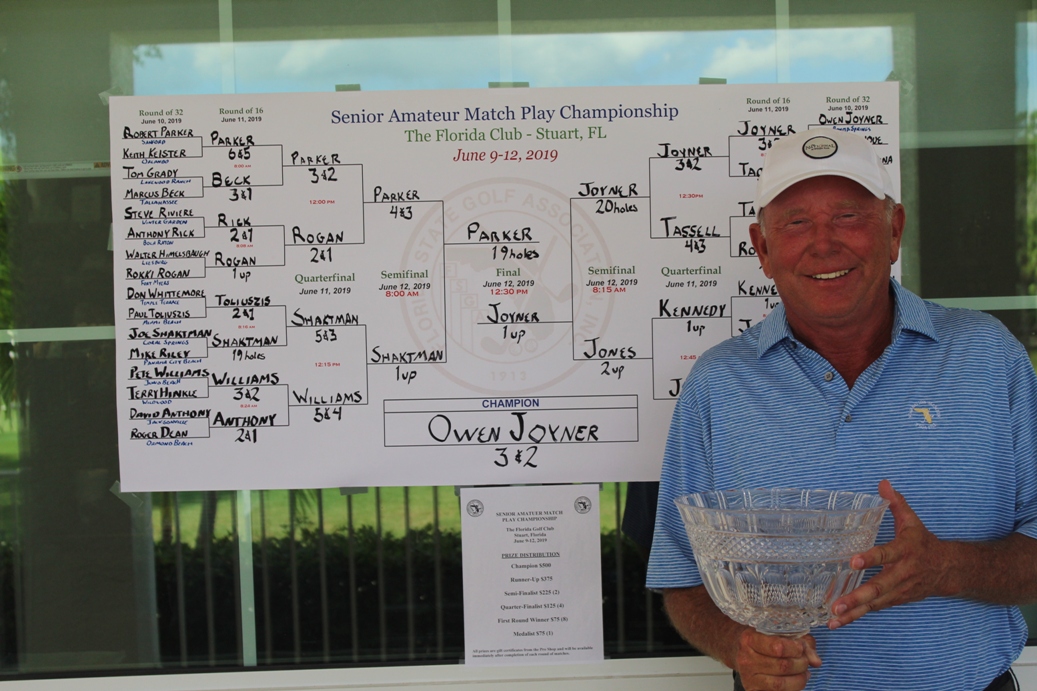 The Florida Club, in Stuart, played host to the 2019 Senior Amateur Match Play Championship on short notice. The Fox Club that was originally slated to host, was recently sold at auction in early May, and with little notice, Golf Course Superintendent, Chris Tompa and Head Golf Professional, Brendan Murphy, came through and the course was a treat.

Owen Joyner captured the championship, defeating Robert Parker, 3 and 2. He joins Pete Williams, as the only other two-time Champion in the events 14-year history of the Senior Match Play Championship.

Robert Parker set the pace in Round 1, firing 69 (-3). Twelve players finished at even-par or better, including defending champion, Pete Williams (72), and 2017 Champion Owen Joyner (70). Day two was moving day, and Parker continued his success, pairing his opening 69, with a 71, to fire 140 (-4) and earned medalist honors. Thirty-seven players finished at 152 (+8) or better, and seven players play-off for the final three qualifying spots.

Eleven of 16 higher-seeded players advanced in the Round of 32. The highest seed to fall, was the fourth seed, Don Whittemore, of Temple Terrace, defeated by Paul Toliuszis 2 & 1. Both past champions, who advanced to match play, Pete Williams (2014 & 2018) and Owen Joyner (2017) advanced, as well as medalist Robert Parker.

Only one match on Tuesday morning would make it to the 18th hole, as Brian Kennedy would defeat Jimmy Jones, 1 up. The top three seeds would advance again.

The quarterfinals saw lots of exciting action. Pete Williams and Joe Shaktman teeing off first, would go all 18 holes, back and forth, with Shaktman defeating the two-time Champion, 1 up. Robert Parker would defeat Rokki Rogan, 4 & 3. The final two matches were unable to finish until after a 90 minute rain delay. Doug Jones, 3 up at one point in the match, was tied with Brian Kennedy thru 15. He would move one up after a par on 16, and then make par again on 18, to win 2 up. Owen Joyner was 5 up at the turn on David Tassell, and 4 up, with 4 to play. Tassell would go birdie (15), birdie (16), par (17) and on 18 make a 70 foot birdie putt from the back left of the green, to the back right to force extra holes. Joyner would eventually right the ship and defeat Tassel in 20 holes.

The semifinals saw medalist, Robert Parker vs Joe Shaktman, of Coral Springs. Parker would strike early, and build a lead to 3 up after the front nine. Shaktman came alive quickly on the back nine. Birdies on 10, 11 & 13, would have him bring the match back to tied. Then a Parker bogey after missing the green in a green side bunker at the par 3, 14th, Shaktman would move 1 up. Parker would win both, 15 and 16, then bogey 17, losing to Shaktman's par, sending the match to 18 tee tied. On 18, Shaktman would miss near the greenside bunker, while Parker's approach found the green and would have a good look at birdie from 15 feet. Shaktman made a great up and down for par, while Parker narrowly missed, and the match would head to a 19th hole. With a birdie on hole #1, 19. Parker punched his ticket to the finals.

2017 Champion, #2 seed, Owen Joyner, would take on Doug Jones, of Brandon. Jones would be 1 up at the turn, and the pair halved holes 10-16. When Doug missed the green on 17, and failed to get up and down, the match became tied. On 18, Joyner would safely find the center of the green, while Jones missed again. A second up failed up and down conversion for Jones gave Joyner a 1 up victory and his birth into the finals for the 3rd consecutive year.

In a battle of the #1 & #2 seeds, Owner Joyner quickly moved 2 up early, as Parker bogeyed holes 1 & 2. The match would seesaw between Joyner 1 up & 2 up as the players traded holes on 4-7. On 8, Parker's wayward drive would cause him to miss his par putt and concede Joyner's birdie to fall 3 down. Joyner kept the pedal down, birding the 9th, to move 4 up. Holes 10-12 were halved with pars. On 13, both players found the par 5, in 2 and had eagle looks. Joyner would lag up from 30 feet and make birdie, then Parker, would give his putt inside the feet a great look, but it burned the edge, another halved hole, and he remained 4 down. The players traded pars on the par 3, 14th. On 15, after Parker missed the green, and chipped it close to a conceded par, Joyner was left to just two-putt from 10 feet to close the match. He would fail to convert, making bogey, and losing the hole, to move to 3 up, with 3 to player. On 16, both players found the green on the challenging, short par 4, but missed the bowl on the front right of the green, as both balls chased to the back half, around 40 feet. Eventually, both players three-putted for bogey, giving Joyner a 3 & 2 victory, and his second Florida Senior Amateur Match Play Championship.