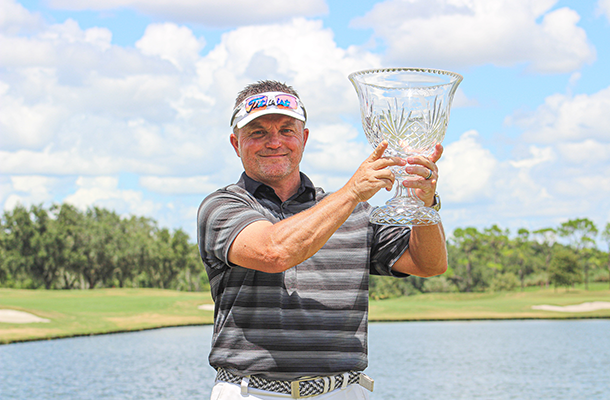 SARASOTA, Fla. – It took a couple extra holes, but Joe Alfieri was crowned the Mid-Senior Champion. The Lutz native defeated Daniel Owen in a two-hole playoff to raise the trophy on Sunday at Laurel Oak Country Club.

Alfieri was in first place heading into Sunday’s final round, with a three-stroke lead over the field.

He ran into some trouble to start the day, bogeying back-to-back holes to fall into a tie for first place.

The four-time Florida State Golf Association Player of the Year, finished off his front nine with a birdie on the eighth.

He birdied two of this first four holes on the back to move to 9-under for the championship. He added one more birdie on the back nine to head to the final hole at 10-under with a two-shot lead over Daniel Owen and Owen Joyner at 8-under.

Alfieri bogeyed the final hole, while Owen’s birdie on the 18th forced a playoff, both players finishing at 9-under 207.

Owen had a rough start to the round with a double bogey on the first hole. He bounced back quick, playing the rest of the round bogey-free. The Ocala native carded two birdies on the front nine and added four on the back nine, including two-straight birdies to finish the round. He posted a final-round 4-under 68, the low round of the day.

After both players made par on the first playoff hole, Alfieri and Owen headed to the par-5 17th hole. Owen missed his birdie putt and tapped in for par, while Alfieri rolled in a 10-foot putt for birdie to secure the championship.

This was Alfieri’s seventh FSGA Championship win and his first Mid-Senior Championship victory. He and Owen were the only two players in the field to post three under-par rounds for the championship.

Joyner took home a third-place finish, posting a 5-under 211 for the championship, while Mike Riley finished in fourth place at 3-under 213.