Rules of Golf - What Can I Move?

What items on the course can players move? 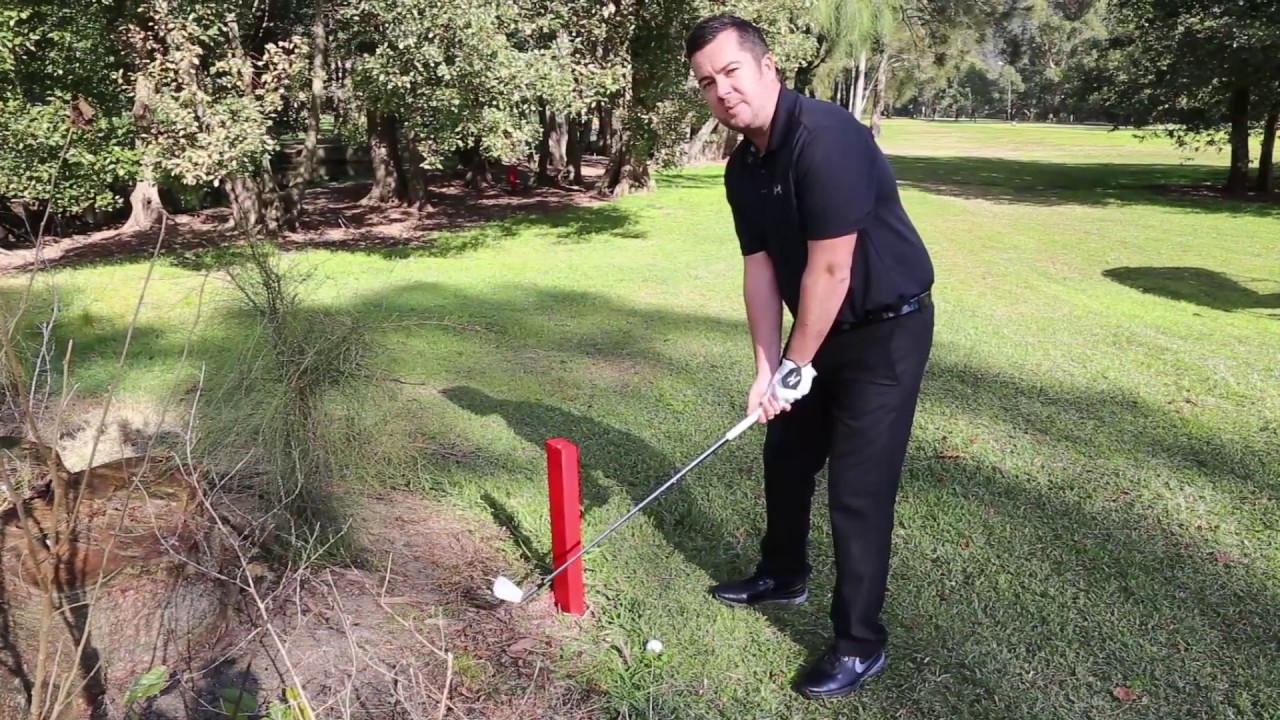 Yes, you may move them. Before making a stroke, you may move a red or yellow stake anywhere on the golf course even if your ball lies in a penalty area.

White Stakes and Other Objects Defining Out of Bounds

No! You may not move items that are defining out of bounds. It is a two stroke penalty if you move an out of bounds stake and do not replace it before making your stroke.

Yes, you may move rakes. Before making a stroke, you may move a rake anywhere on the golf course even if your ball lies in a penalty area. Caution – you may not move rake to a position with the intent to influence the movement of a ball (like place a rake on a hill to stop a ball from rolling into the water). Additionally, if a ball is rolling towards a rake on the ground, do not move the rake, just let the ball roll and strike it.

If your ball is resting against a rake, the procedure is simple. First, if you think your ball might roll a decent distance it might be smart to place a coin or tee next to the ball, but do not pick the ball up. Second, carefully remove the rake. Lastly, if the ball moved, just replace the ball on its original spot. If the ball will not come to rest on the original spot (after trying twice), you place the ball in the nearest spot not nearer the hole that the ball will come to rest. No penalty.

Yes, you may move these objects. Before making a stroke, you may move man-made objects anywhere on the golf course even if your ball lies in a penalty area. Just like rakes, you may not move them into a position with the intent to influence your ball, or move them while a ball is in motion that might strike them. 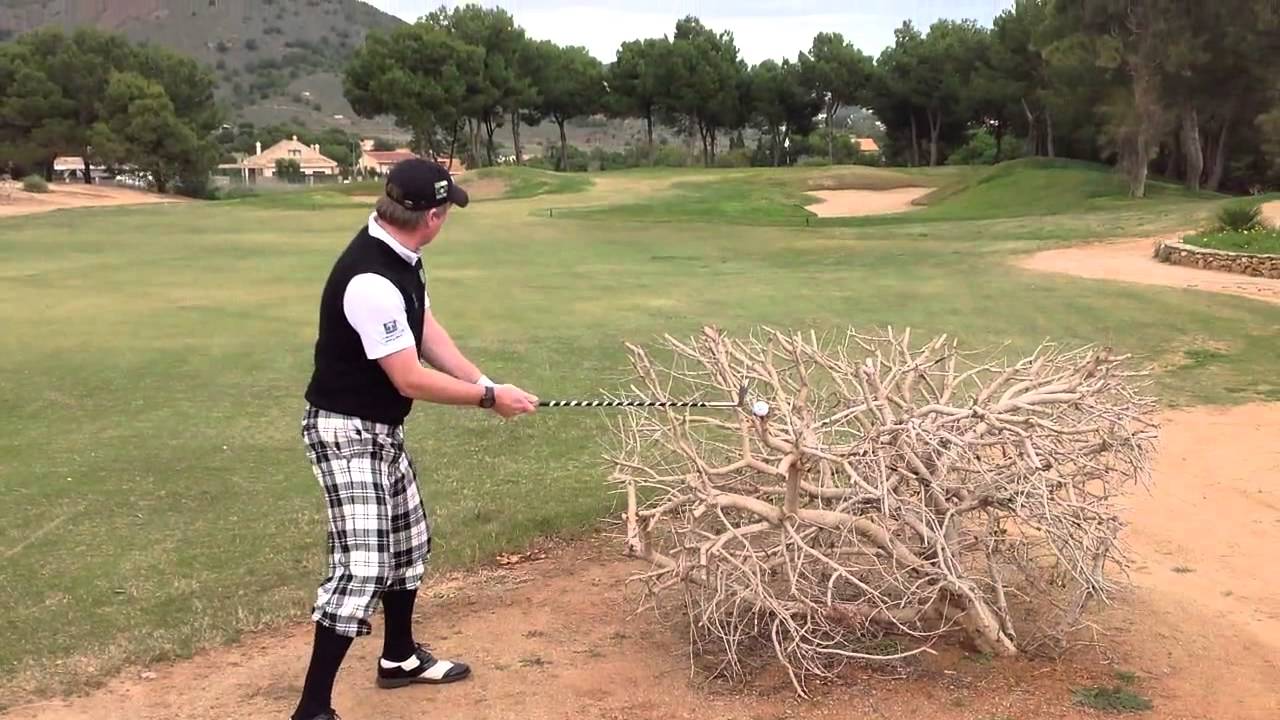 No, you are not allowed to move growing things to improve the conditions affecting the stroke, which includes your line of play.

During a swing, including the backswing, there is no penalty if your swing causes natural objects to move, bend, or break, provided you complete the swing.

Spanish moss is very common in Florida and interferes on the golf course occasionally. The answer on whether or not you can move it depends on the location of the moss and the location of your ball. 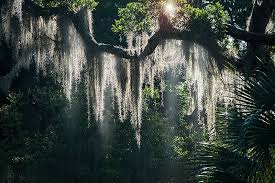 If the moss is hanging from a tree then you are not allowed to move it; however if it is on the ground you may move it, but be careful. If you move the moss from the ground and your ball moves then you are penalized one stroke and must put the ball back. If you ball lies on top of spanish moss get creative and figure out a way to play the shot.

Loose impediments, by definition in the Rules of Golf, are any unattached natural objects such as: stones, loose grass, leaves, branches, sticks, dead animals, animal waste, clumps of compacted soil, and worms, insects and similar animals that can be removed easily and the mounds or webs they build. The items listed are not loose if they attached or growing, solidly embedded in the ground, or sticking to the ball.

Loose impediments may be moved anywhere on the course including bunkers and penalty areas, but your ball must not move in the process.  If you ball lies on top of a loose impediment, say a leaf or pine needles, too bad and you will need to play the ball as it lies or take unplayable relief.

If you read carefully, you may have noticed that sand is not a loose impediment. You may not move sand anywhere on the course except the putting green. It does not matter where your ball lies, you may always move sand that is on the putting green, and you may move it using a hand, towel, glove, clubhead, etc. 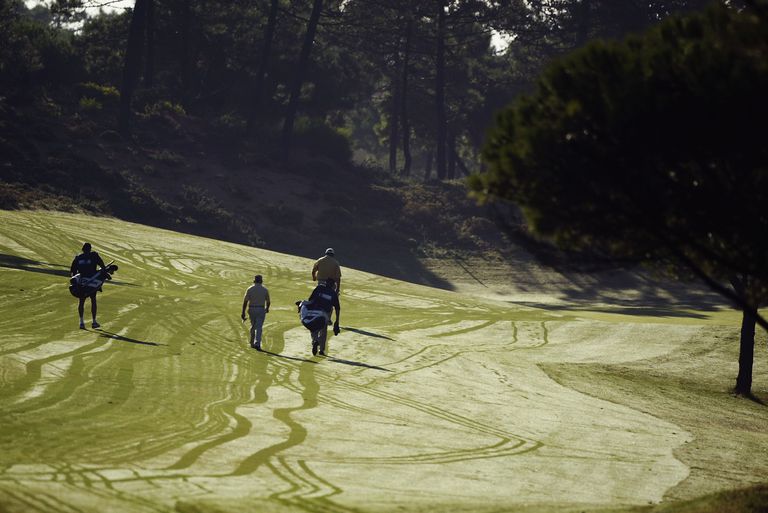 Dew is also not a loose impediment. You may not remove, or mop up dew anywhere on the course except the teeing area.

Golf Balls and Other Players’ Equipment

If a golf ball or equipment from any player affects the conditions affecting your stroke, including your line of play, you may have them moved without penalty. Unlike the rake and other movable obstructions mentioned earlier, equipment of players may be moved while a ball is in motion without penalty.

If the flagstick was removed and is lying on the ground, resting against something, or being held by a someone, the flagstick may be moved while a ball is in motion. Additionally, if a ball in motion strikes a flagstick that was removed from the hole previously, there is no penalty provided the placement of the flagstick, and ball striking it, was accidental.