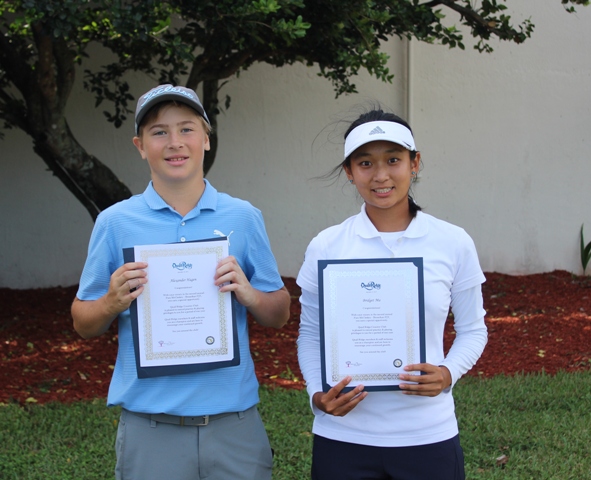 LAKE WORTH, Fla. -  Winston Trails Golf Club hosted the second FJT event honoring former Head Golf Professional, Pam McCloskey Brosnihan. Pam’s memory will be honored each year with a FJT event and the FSGA will offer a scholarship in her name to a local junior who demonstrates determination, drive and passion for the great game of golf. Alexander Hagen and Bridget Ma prevailed to win their first FJT event and honor Pam by hoisting the trophy in her name!

Erik Plenge, of Lima, Peru, was on fire in round one, posting five birdies to secure the early lead by four strokes with a four-under 68. Round two saw a different round from Plenge with five bogies and one birdie leaving him tied for first place with Carlos Caloca and Alexander Hagen at even par 144. Caloca, of Delray Beach, played consistent golf making four birdies in both round one and two to finish with two even par scores and total of 144. Hagen, of Naples, carded a 74 in round one with an eagle on the par five fourth hole and with six birdies in round two, climbed up to tie for the lead with a two-under 70.

Plenge, Caloca, and Hagen headed to the 18th hole for a sudden-death playoff. The trio tied the first playoff hole and after playing number 18 a second time Plenge did not advance. Caloca and Hagen went on to play the 17th hole, a par three over water. Hagen prevailed with a par and claimed his first FJT victory!

Impressive red numbers highlighted the leaderboard with Tori Mouton, of Saint Johns, in the lead after a round one three-under 69. Windermere resident, Bridget Ma, finished two strokes back in second place after four birdies led her to a one-under first round. Mouton continued to play strong in round two, carding six birdies to finish with a 71 and four-under 140 total. Ma was a force to be reckoned with in round two, carding five birdies and single bogey to clinch first place by one stroke. A four-under 68 and 139 total earned Ma her first FJT win! Mouton finished in second place and Kelly Shanahan, of Coral Springs, rounded out the top three at 149.