The South team captured the Women's Florida Cup for the fourth-straight year. 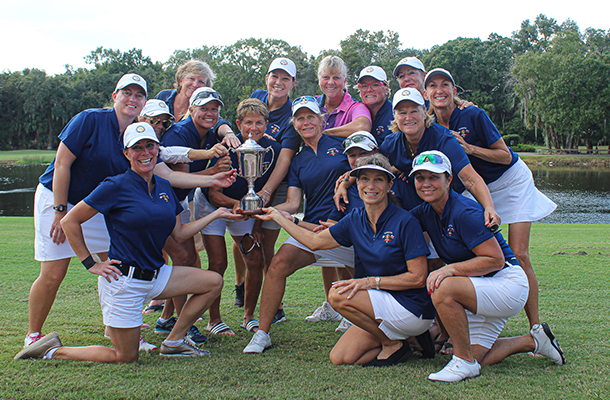 TAMPA, Fla. – For the fourth-straight time, it was the South who raised the Women’s Florida Cup on Tuesday. South Florida was victorious during the two-day championship, retaining the cup with a 20-12 win at Tampa Palms Golf & Country Club.

It was the South’s fourth-straight Women’s Florida Cup Victory. This year’s eight-point margin of victory is closest Florida Cup result in the championship’s eight-year.

The championship began on Monday morning with eight four-ball matches. Battling through the rain, the South came out strong, earning seven points in the morning, while the North took one.
Kim Keyer-Scott and Danielle Amiee captured a decisive 6 and 4 win for the South over Therese Quinn and Jodi Sullivan.

South’s Meghan Stasi and Barbara Lilley earned a win against Kelli Pry and Carolyn Creekmore, 4 and 3. Gigi Higgins and Mary Jane Hiestand took the lead on the first hole and never looked back, adding a point for the South after defeating Susan Keane and Sarah Phillips-Durst, 3 and 1.

Monday afternoon’s foursome matches saw the North stage a comeback, winning five of the eight matches. North’s Pry and Sullivan had a commanding win over Betsy Knights and Lilley, 7 and 6. Pry and Sullivan won five-straight holes to take the match. The net teams of Lucy Antonetti & Lori Collins and Christine Martin & Debbie MookSang added two points for the North team.

North’s Quinn and Lin Culver picked up a win in the last match of the day, defeating Stasi and Amiee, 2 and 1. After grabbing five points in the afternoon, the North headed into Monday’s final round trailing the South with a 10-6. The South need 6.5 points to win the Florida Cup, while the North needed to earn 10.5 points.

The South team came out strong in Tuesday morning’s singles matches, winning four of the first five matches. Natalie McNicholas earned the first point of the day for the South, with a dominating 6 and 5 win over Janice Wilson.

Kiely Allen posted the first point of the day for the North, winning 5 and 3 against Susan Temple. Aimee and Sandie St. Onge both captured 4 and 3 wins to contribute two points for the South. In the second to last match of the day, Kathy Glennon had a commanding win over Marion Reid, winning 7 and 6.