Joe and Taffie Brisley were awarded the Tournament Volunteers of the Year, while Carroll Setzer received the Course Rating Volunteer of the Year. 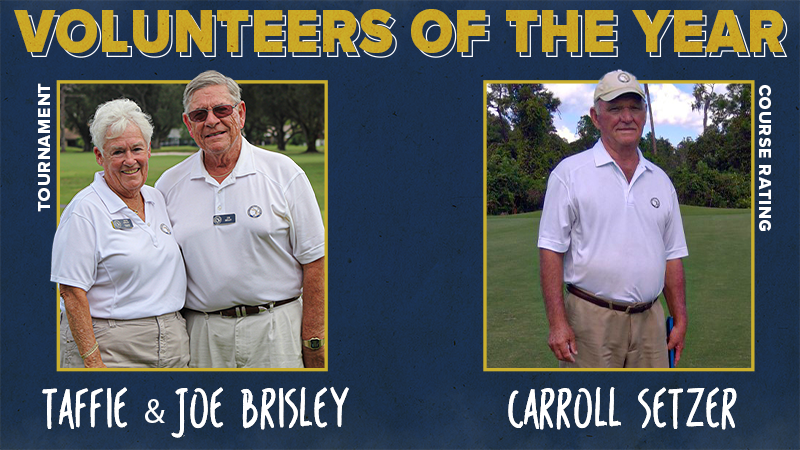 Their time and dedication to the game is evident, volunteering at 50 events in the last five years alone. Taffie is well versed in the Rules of Golf, as a Senior Rules Official, and served as a Rules Official on the LPGA Futures Tour.

The Brisleys bring a personal touch to every task, creating lasting relationships with players, spectators and officials. Players arrive to events excited to be greeted by Taffie and Joe with such positivity and support. Their passion for golf is truly infectious.

The couple met and grew up together in Virginia, where they attended the same elementary and high school. They got married after college and have been married for 48 years. Joe started playing golf at a young age and worked as a caddie in high school at Westwood Country Club, while Taffie picked up the game in college, when she learned to play as a part of her physical education major.

Setzer, of Lake Worth, began volunteering with the course rating team at the FSGA in 2012. Due to his commitment to volunteering, leadership and highly proficient course ratings, Setzer became a Course Rating Captain within his first year. He has worked hard to learn The Course Rating System and has demonstrated exceptional organization, attention to detail and skilled knowledge.

The North Carolina native has played golf for most of his life, but began playing more regularly after retiring. Setzer, who served as a submariner with the Navy, retired from American Airlines after over 30 years as a commercial pilot.

After moving to Florida with his wife, Martha, in 2005, Setzer wanted to find a way to contribute to the game he loved and began volunteering with the FSGA a few years later. Along with his passion for golf, Setzer enjoys boating, ocean fishing and spending time with his two children and four grandchildren.

All three volunteers will be honored at the FSGA’s Annual Meeting and Dinner in Jacksonville at Timuquana Country Club, on November 22, 2019. The Annual Dinner celebrates the best players in the state, tournament volunteers, board members and many other important individuals involved in the game of golf in Florida.