Rudometkin & Clark Prevail at Next 100 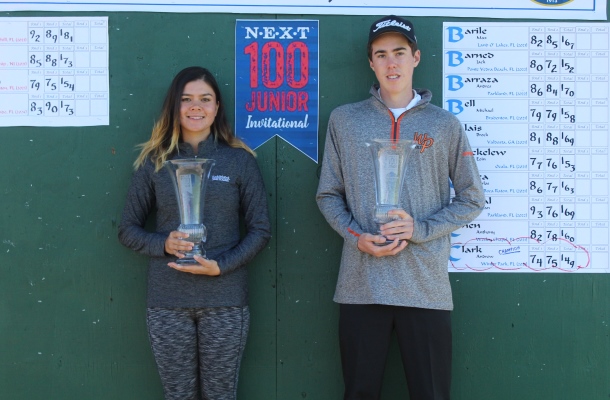 The Next 100 Junior Invitational was established in 2019 as a way for junior golfers to gain experience and find their college golf home. Players and parents had the opportunity to attend a college coaches panel on the evening prior to round one. Due to inclement weather causing a three hour delay during round one, the event was shortened to 18 holes on both day one and two. The juniors faced tough competition, weather, and colder temperatures to kick start the New Year.

A tight leaderboard concluded round one, with Yuze Zhang, of Windermere, at the top. Three birdies on the back nine earned Zhang the round one lead at even par 72. Reggie Zhu and Stephen Hickham started round two one stroke behind.

Andrew Clark, of Winter Park, climbed up the leaderboard, erasing a two stroke deficit, due to a final round 75.  A strong finish with birdies on holes 15 and 16 moved Clark into a tie for first place with Zhang. Despite a rough second round start, Zhang, previous FJT champion, finished with a birdie on the 14th hole to tie Clark at five over-par 149. Clark and Zhang continued to the 18th hole to determine the champion. Hitting his second shot to four-feet, Clark finished the first playoff hole with a one putt birdie to be crowned victorious.

Lisa Marie Rudometkin, Emily McLatchey, and Jordan Fischer finished round one tied for the lead at five over-par 77. The three juniors fought back and forth in round two making for an exciting finish. Rudometkin, of Wesley Chapel, started strong out of the gate with a birdie on the first hole to turn at 37. Fischer, of Cape Coral, and McLatchey, of Winter Park, fell behind after front nine scores of 40 and 41 respectively. Despite Fischer’s birdie on the 13th hole and eight pars in her final nine she could not overcome Rudometkin’s lead. Rudometkin birdied hole 14 to finish with a 75 and secure her first place victory at 152. Fischer finished one stroke behind in second place with a final round 76.

Third place was claimed by Caiyi (Flora) Zhang, of Bradenton, after a near flawless final nine holes. Zhang started the second round two strokes back after a round one 79, and finished with eight straight pars for a 75 and 154 total. Despite back to back birdies on holes 10 and 11, McLatchey fell to fourth place, three strokes back, at 155.