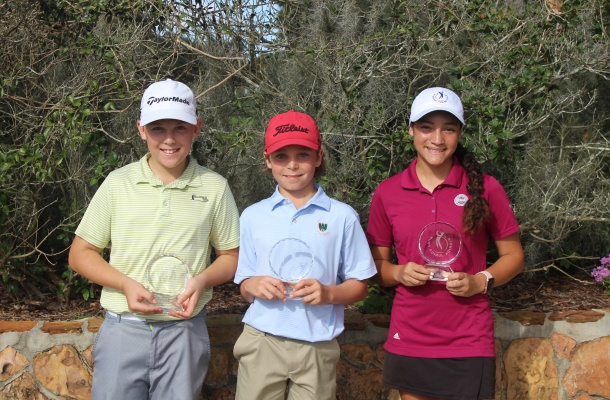 PALATKA, Fla. – The first FJT (9-12 division) of 2020 kick started the year with two wire-to-wire victories and a come from behind win at Palatka Golf Club, January 11-12.

Jessy Huebner, of Port Saint Lucie, secured the round one lead after posting the only red number and tournament low round of the day, two under-par 68. Two birdies on both the front and back nine of day one gave Huebner the lead by two strokes over Lev Grinberg, of Boca Raton. Grinberg finished round one with back-to-back birdies on holes 17 and 18 to finish the day at even par 70.

Champion of the 2019 Futures Championship, Huebner is no stranger to tough competition. Despite Grinberg starting round two with a birdie on the first hole, followed by another birdie on the fifth hole, Huebner held onto the lead. Birdies on holes eight, 10, 11, and 16 earned Huebner a one under-par second round and 137 finish. A bogey free final round of three under-par 67 from Grinberg left him tied at the top with Huebner. Huebner and Grinberg would determine the champion in a sudden-death play-off. Huebner earned a victory in his first event of 2020 after winning the first play-off hole!

Two rounds of 77 from Christian Koehn, of Winter Park, and Alen Gurdogan, of Palm Beach Gardens, tied at the top after round one. With a three stroke lead, the duo would battle for the first place win in round two.  Both Koehn and Gurdogan started round two three over-par after the third hole. A double-bogey on the seventh hole by Gurdogan gave Koehn a one-stroke lead heading into the final nine holes. Fighting back with birdies on holes 10, 13, and 14, Gurdogan could not overcome Koehn’s lead after posting a second round 81. Koehn increased his one stroke lead with six pars and three bogies on his final nine holes to finish with a 78. Gurdogan finished in second place at 158, three strokes behind. A first time FJT win was captured by Koehn with a 155 total!

Marley Pedrique, of West Palm Beach, was looking to add a second win to her resume after finishing round one in the lead by three strokes. A birdie on the fourth hole gave Pedrique the early lead with a 78 in round one. Morgan Rodriguez, of Delray Beach, erased a three stroke deficit in round two to climb into the lead. Three-time FJT winner, Rodriguez finished round two with 13 pars and a 76 to seize first place by 11 strokes. McKenna Murphy claimed second place due to rounds of 81-87—168, while Pedrique finished in third place at a 170 total. Rodriguez would start the year being crowned champion with a 157 total.