The four Florida Cup veterans will hope to lead their teams to victory later this year. 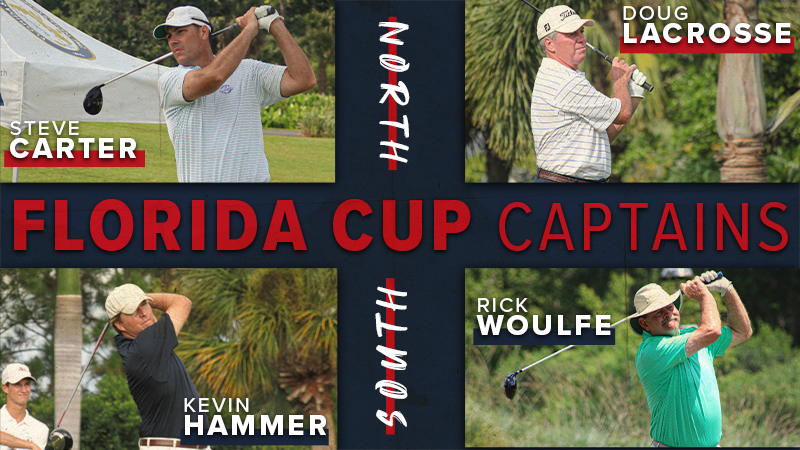 The Florida Cup veterans will hope to lead their teams to victory later this year. The Florida Cup will be held October 15-16 at Bay Colony Golf Club in Naples. Two sixteen player teams, representing the North and the South of Florida, will compete in this Ryder Cup style format.

LaCrosse will return as a captain, after leading the 2018 North Team, alongside Marc Dull, to a victory. In the 2018 matches, LaCrosse was unable to compete due to an injury, but was present as a non-playing captain. In three previous Florida Cup appearances, the Tampa native has a 5-2-2 record.

"Steve and I look forward to keeping the cup in the North after the win in 2018. I was disappointed to not compete in 2018, but I am excited to be back out in 2020 to help the team as opposed to riding in a cart as a cheerleader, constantly updating my iPad,"  LaCrosse said.

Carter will make his fourth Florida Cup appearance and first as a captain. The Saint Augustine native was part of the victorious team in 2018 and holds a 5-3-1 record in Florida Cup matches.

"I'm honored and extremely excited to co-captain the North Team, along with Doug. Based on the Florida Cup history, I fully expect another spirited version of the matches." Carter said.

Woulfe will make his record tenth Florida Cup appearance in 2020. The Fort Lauderdale native was slated to be a captain of the South Team in 2018 but was sidelined by injury. Back healthy in 2020, Woulfe will look to improve on his 11-9-5 overall record from previous appearances.

Woulfe is a household name in Florida amateur golf. Once a Michigan State University standout, he never turned professional and had a amateur career that saw him amass nearly 20 state championships, including the 2012 Mid-Amateur Championship at the age of 63. In 2007, Woulfe captured the Senior Amateur, Senior Amateur Match Play, Mid-Senior and Mid-Amateur Four-Ball South Championships. He went on to earn one of his nine Senior Amateur Player of the Year honors. Woulfe was also a three-time (2002, 2004 and 2006) Amateur Player of the Year, while also serving as the FSGA President in 2000 and 2001.

Outside of FSGA play, Hammer posted a top-10 finish in the 2015 Coleman Invitational at Seminole Golf Club and advanced to the Round of 16 at the 2014 Crump Cup at Pine Valley.

"It’s such a privilege to be a co-captain and help bring together some of the very best, and most involved, amateur competitors from around the state. It doesn’t take much for the Florida Cup team spirit to come alive and we fully expect an energetic season leading up to these coveted matches," Hammer said.