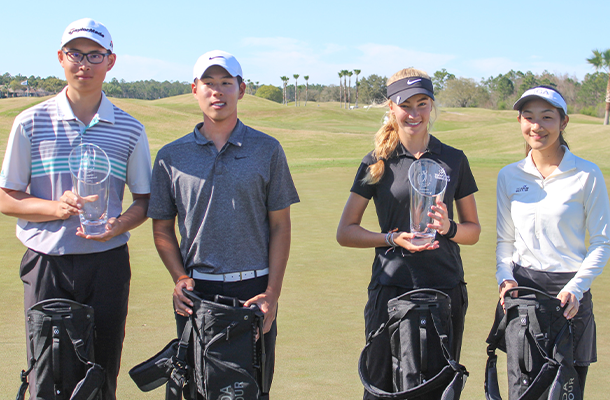 Kim earned his first FJT on Sunday with a 3-over 147 for the two-day tournament. The Port Saint Lucie Native posted a 75 in the first round to sit one shot back of the first-round leader, Tyler Mistretta.

Kim had a slow start in Sunday’s final round, but posted back-to-back birdies to close out the front nine. He started the back nine with a birdie, before adding two bogeys. An eagle on the par-5 16th secured a final-round 72 and the win for Kim.

Cyrus Lee and Chales Kurtz finished tied for second at 4-over 148. Jacob Wolf and Same Karman took home a tied-for-fourth finish at 7-over 151.

Lee, Wolf and Kim’s final-round 72 was the low round of the tournament.

Liu used a 2-over 146 to earn the two-stroke victory at LPGA International. The Orlando native carded a 2-over 74 in the first round to sit one shot back of the first-round leader, Max Fonseca.

Liu began the final round with a 1 over on the front nine, heading to the back trailing Fonseca by one shot. Liu posted back-to-back birdies to start the back nine to take the lead. He secured the win with a final-round 72.

Despite an eagle on the 16th, Fonseca couldn’t catch Liu on the back nine and took home second place at 4-over 148. Timothy Williamson finished third, carding a 7-over 151.

Valentine Savioz finished the weekend with a runner-up finish, carding 13-over 157. Posie Farrelly finished one shot back in third place at 14-over 158.

Blanc picked up her first FJT win with a wire-to-wire victory, posting a 6-over 150 for the tournament. The Wartrace, Tenn. native carded a 2-over 74 in the first round to hold a five-shot lead over the field. She began the final round with a 1 over on her first nine.

After three-straight bogeys to start her second nine, Blanc settled down and played the next four holes at 1 under. She finished with a final-round 76 to earn the win.

Ryleigh Knaub finished second at 11-over 155, while Kaley Amuso and Arenui Faana tied for third at 14-over 158.