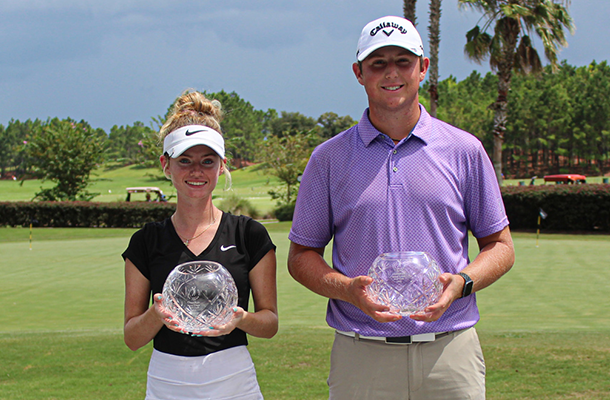 This is the second FJT win for Mcaluchlan and third for Whitley.

McLauchlan picked up the win in the Boys 13-18 Division with a 12-under for the three-day championship. He took the 36-hole lead with a second-round 66, carding four birdies and an eagle to begin the final round with a one-shot lead over the field.

The Neptune Beach native started Sunday with a 1 under on the front side. McLauchlan birdied two of the first four holes on the back nine to move to 11 under for the tournament. He added another birdie on the 16th to post a 4-under 68 to secure the four-shot victory.

Max Barile took home second place at 8-under 208, finishing the tournament with a final-round 68. Campbell Kennedy finished third at 7-under 209, while Shawn Coultoff and Colton Swartz tied for fourth at 6-under 210.

Whitley earned the six-shot win in the Girls 13-18 Division, finishing the weekend with a 11-under 205. She held the lead after 36 holes, after beginning the tournament with rounds of 65-73, to hold a one-shot lead over the field

The Sarasota native got off to quick start in the final round, carding a bogey-free front nine with a birdie. Whitley continued her strong play on the back side, adding four birdies including three straight, to finish the day with a 5-under 67.

Karoline Tuttle continued her strong play, taking home a second-place finish, after capturing the win at Eagle Creek Golf & Country Club last weekend. Tuttle posted a 5-under 211 for the tournament, carding a final-round 72.

Juliana Camargo and Jacqueline Putrino finished tied for third at 4-under 212.