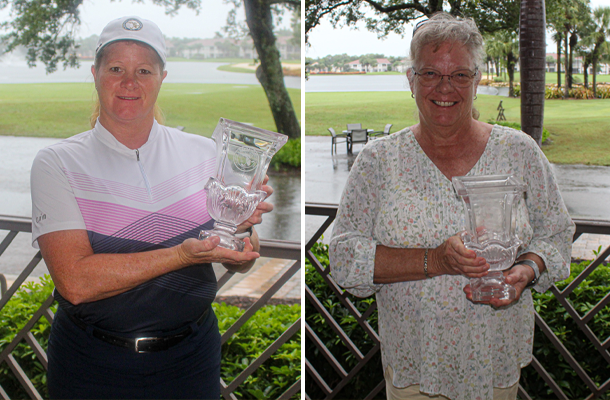 BONITA SPRINGS, Fla. – Melanie Clegg captured the Middle Division while Liz Porter won the Forward Division at the Women’s Net Championship. After the first round was complete, Tropical Storm Sally added several inches of rain to Spring Run Golf Club causing the event to be shortened to 18 holes.

Clegg, of Merritt Island, prevailed after a scorecard playoff to win her first FSGA championship. Fighting through the rain drops, Clegg tied Nancy Bradley, of Naples, at the top with a 2-under 7. Clegg played impressive golf posting two gross birdies on the first and 16th holes. Bradley posted four net birdies on the front nine and two net birdies on the final nine holes. West Palm Beach native, Jennifer Jackson, finished one stroke back in second place overall with a 71, but secured the win in the Middle First Flight.

Saturday night, Tropical Storm Sally added two-inches of rain to the already nine-inches that Spring Run Golf Club received over the past week. The difficult decision was made to close the golf course and shorten the championship to one round. The tie between Clegg and Bradley was broken using a modified USGA scorecard match. In the absence of a final 18 holes, tie breaks went directly to the final nine holes. Clegg was crowned the winner with a final nine-hole score of net 34 defeating Bradley’s final nine hole score of net 37.

Three players, Liz Porter, Elizabeth Rees and Yenisse Cachonegrete, tied at the top after a round one score of 1-under 71. Porter, of Fort Lauderdale, played consistent golf and finished strong with back-to-back birdies on holes 17 and 18. An impressive net eagle on the par-3 14th hole and five net birdies from Rees, of Naples, secured her tie at the top. Cachonegrete, of Boynton Beach, started strong with a net albatross on the par-5 second hole to finish with five net birdies.

A scorecard playoff on Sunday morning determined the champion with the score on the last nine holes. Porter’s final nine-hole score of net 35 prevailed by one stroke over Rees and two strokes ahead of Cachonegrete to be crowned champion. Porter claimed her first FSGA Championship win at the Women’s Net.

Jill Giles, of Cocoa, won the Forward First Flight after a scorecard match with Kathleen Homan, of Jacksonville Beach. Both players carded rounds of 72, but Giles net 36 on the back nine was enough to secure the victory.